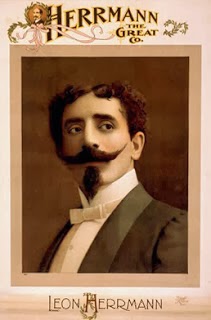 Back in March 2011, I wrote a little article on this blog about Jessy Lasky's connection to magic. I stumbled upon his connection by accident. I knew that Lasky had something to do with Houdini's movies and looking further into it the name Herrmann popped up. So the research began.

Here are some of the sources of the information.

And finally, A website created by Betty Lasky
http://www.jesse-l-lasky.com/timeline.html

I found that some of the resources mention Herrmann the Great, but the time period didn't make sense to me because Herrmann the Great died in 1896. So that is how I figured out it was Leon Herrmann. There were also a number of additional newspaper articles I found through the Library of Congress, but I didn't keep track of that info as best as I should have. Still, looking over the above resources, everything I found can be found above.

James Hamilton had asked me in April 2013 where I found the info, while at the Magic Collectors Conference in Washington D.C.. I mentioned that I discovered it all online, but obviously didn't have the source info handy. Let me state for the record, James Hamilton is THE LEADING SOURCE of Information and Knowledge on the HERRMANN FAMILY today! No question about it. In fact, James and I talked about Herrmann for almost an hour and it was one of the most fascinating conversations I've ever had, one of the highlights of the weekend for me.
James also, apparently uncovered much of the Herrmann/Lasky connection a few years previous and spoke on it at a Magic History Conference in 2010. Unfortunately for me, I never heard his talk or was aware of it.  Anything I found was discovered without the knowledge of James's research. But make no mistake, James is the authority on Herrmann. I seriously doubt I would ever uncover anything that James Hamilton was not already aware of. I have the utmost respect for his knowledge, and I'm posting these resources here just to show where I got my information.