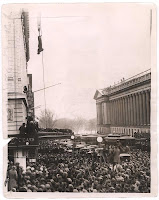 The photograph of Houdini hanging upside down in a straight jacket with the Washington Monument in the distance and the Treasury Building across the street is quite famous. Although in the photo to the left the monument is not visible.  I always assumed that this was the only time he did an out door stunt in D.C.. However, I was mistaken. That escape took place in front of the Keith's Vaudeville Theatre on January 12, 1922 (today). It just so happens that the National Press Club had their offices in the same building as the theatre at the time, which I'm sure had something to do with the iconic photo that was taken. But there were earlier publicity escapes and challenges that took place in Washington D.C.. 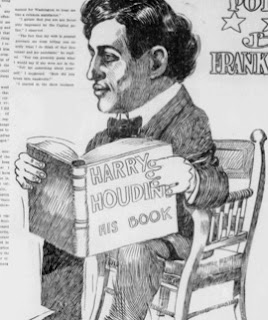 Let's begin in January of 1906.  New Years Day 1906 he escaped from a jail cell at the 10th Precinct  625 Park Road NW in D.C. (Turns out the building IS still there, though I had originally reported that it wasn't. ). A few days later on January 6th Houdini escapes from the Jail Cell that once held the assassin of President Garfield at the D.C. Jail. He was no stranger to pulling out all the stops when he came to the Nation's Capital.

In fact, also in 1906 Houdini accepted a challenge to escape from a man sized Paper Bag. He also took on the challenge to escape from a zinc lined Knabe piano case. If that wasn't enough both Saks & Company (they would later become Saks Fifth Avenue Dept Store) and S. Kann Sons & Company (The first D.C. area Department store) challenged Houdini to get out of a packing crates that they built.  These challenges took place at the Chase Theatre which was previously known as The Grand Opera House and was located at 1424 Pennsylvania Ave NW, directly across the street from the Willard Hotel.

Following Houdini's departure from D.C., a local athletic teacher Maurice Joyce said he would expose how Houdini did his escapes. He did this at the Columbia Theatre. Please remember this name as later in the year I'm going to do a piece on the Columbia Theatre in D.C.. Mr. Joyce claimed the boxes and cases were all made per Houdini's instructions and were faked by the builders. All of the challengers said Mr. Joyce was a liar, more than likely he just didn't know and this was good a chance as any to gain some personal fame for himself.

Then years later on April 19, 1916, Houdini is back and this time he is hung upside down 100 ft in the air outside of the Munsey Building. It took him two minutes and thirty seconds to free himself from the straight jacket! The police claimed that over 100,000 people watched Houdini's escape. They also said it was the single biggest crowd next to an Inaugural Event in the city's history. At least that is what the Kalush biography states. The Washington Times reported 15,000 and then the following day corrected that up to 20,000. Clearly they couldn't count any better in 1916 than they do counting crowds in DC today! One more note about the Munsey Building Straightjacket escape, and I didn't realize this when I first posted the article. Apparently, the Washington Times Newspapers Offices are located IN the Munsey Building. Well Done Houdini!

When I first read about this escape I searched and searched for the Munsey building and came up with nothing. And then one day I found it, and I was rather surprised at where it was. The Munsey building was directly next door to the National Theatre on Pennsylvania Ave. The day before his straight jacket stunt he gave an interview to the Washington Times. It's an interesting interview because he says that he's been escaping for 'thirty years' and so far has never been stuck. But eventually someone will come along and trap him so he's about ready to hang it up. He also mentions he'll continue to perform but presenting things that are not quite as spectacular. Well first, thirty years from the date of the newspaper would have made Houdini 12 years old, so I'm not sure that's quite accurate. Secondly, this is 1916, and six years from when this article came out, he does another upside down straight jacket escape promoting his appearance at Keith's Vaudeville Theatre that I mentioned above. The problem was, Houdini wasn't Houdini unless he was doing spectacular things. 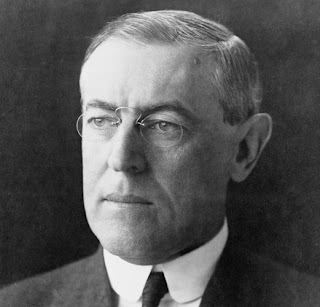 While at Keith's President Woodrow Wilson took his wife to see Houdini perform the Water Torture Cell. Keith's was actually President Wilson's favorite theatre and he attended performances there often. According the the Silverman biography, following the show Wilson said to Houdini that he envied his ability to get out of tight situations. Although for facts sake, the Kalush Biography says this exchange actually happened in Dec 1914 (two years previous) when Houdini received a private invitation to visit the President at the White House. Who cares it's still a pretty big compliment from the President of the United States!

Were there more? You bet there were. But I'm actually still gathering data on all of it. You see something that I never considered before was that when Houdini was appearing somewhere, part of his deal was that he would accept challenges daily. So in a two week span of time he could have 14 different challenges.

Apparently Houdini made quite an impression on other politicians in town as well. The same day that President Wilson attended a performance of Houdini's at Keith's theatre, Houdini later went to the Visitors Gallery at the Capital Building and was spotted by Vice President Marshall. The Vice President waved to Houdini and slowly and gradually others did as well. The Washington Times said "in show business terms, Houdini stopped the show!" Vice President Marshall sent a note to Houdini who was then taken to the V.P's office. Several other Senators showed up and Houdini did an impromptu performance for the members of congress right there in the Vice President's Office. Houdini was quoted as saying "it was the proudest moment of his life".  This quote was in regards to having Wilson see him at Keith's and then later sharing the afternoon with members of congress.

There is much more to Houdini in D.C. but most of that deals with his fight against Spiritualism which I'll save for another time.
Posted by Carnegie