Houdini-opoly The Board Game For Magic Fans! 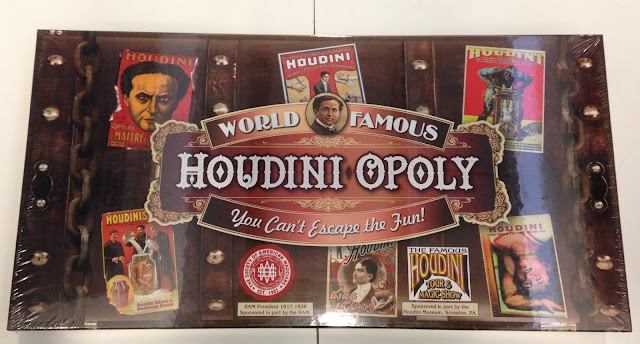 This is really almost too good to be true. I mean, who would go to the time, effort, and even struggle to produce a version of an Opoly Game with HOUDINI as the focus? Umm, well, Houdini fans and magic historians, that's who! And when it comes to fans of Houdini's and two people who have dedicated their lives to keeping the memory of Houdini alive, you can't get much more dedicated than Dorothy Dietrich and Dick Brookz.

They began the process with a kickstarter campaign and ended up producing an extremely successful campaign! The concept of a board game about Houdini seems on one hand to be very dated. But SO WAS HOUDINI. He's from another time. Yet even though he lived 100 years ago, he is just a relevant and popular today as ever. So I'd say their choice of a board game was sheer brilliance!

I will be honest, when the box arrived, it's so breathtaking I did not even want to open it. It was a struggle in fact to tear open the shrink wrap and see what was inside. It's one of those double edged swords, do I or don't I? But I had to. Curiosity for one was just overwhelming. But secondly, I needed to see if the inside was as spectacular as the outside. The answer.... 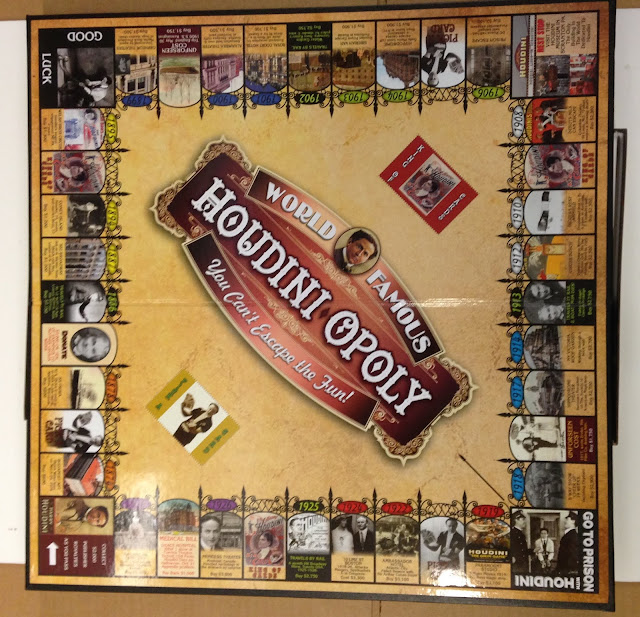 WOW! It's even more amazing on the inside! Take a look at the board itself. So many incredible details included on the board, so many great photos. And now look at what comes inside the box...many pieces familiar in other Opoly games, the properties, the cards and money. But take a closer look, the cards, the money, they've been Houdini-ized! 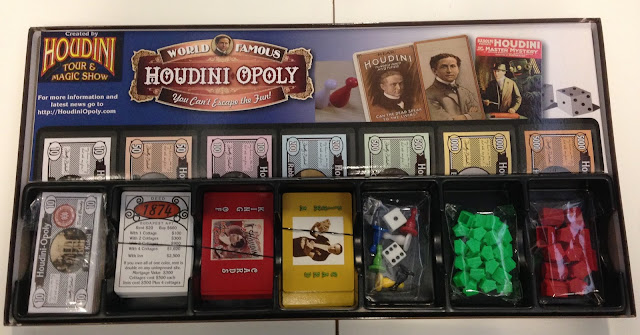 I'm not sure I can bring myself to open the bags and money/houses/game pieces though. So that means I might never get to PLAY Houdiniopoly. Wait? What am I saying??? I've GOT TO PLAY THIS GAME NOW!!!! I'm going to contact some fellow magicians and coordinate a Houdiniopoly Night! How cool would that be!?!

There is one more little treat I'd like to share with you. For the folks who contributed to the kickstarter campaign there were some goodies given as a thank you for contributing. This was a bag of extra game pieces, all based on Houdini's career. So you've got an Elephant for the Vanishing Elephant, a couple dogs that are just like Houdini's pets, a Milk Can, some barrels, a playing card, top hats and more! It's just awesome. 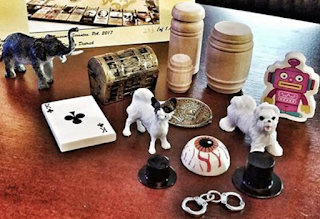 If you're wondering how to get one (or two or three) of these board games yourself, it's so easy. Just go to Houdiniopoly.com I'm beyond impressed with the quality of this product. The thought and time and energy that went into this is evident in the final product. I want to thank Dick and Dorothy for including my name among those who helped with this. I'm not sure how much I really did, other than contribute. I was a bit 'out of touch' when this was all being developed. In fact, looking back over the various emails, I see that I had planned to contribute more to put an ad on the back of the game for TheMagicDetective. com but I just didn't get it done. Life has been a little challenging the last couple years, but things are looking up. And things will be looking up for YOU too when you order your own Houdiniopoly Board Game!!! Do it today as I'm sure these are in limited supply.