Houdini's Magic, The Best for Last

I saved the best for last. But when I finish this, I'm going to ADD to the list on another blog. First, as Houdini presented these two effects, they were escapes. But both can be done as a straight escape or as magic. 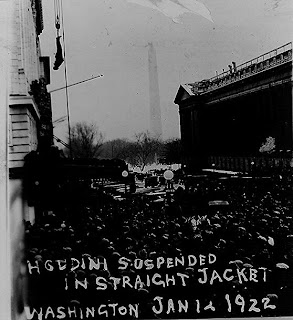 The Straight Jacket Escape: This is pure Houdini. He came up with the method, the idea and the delivery. It was his brother Hardeen however who took it up a notch.
Houdini claims he got the idea after seeing an inmate in an insane asylum struggling inside a straight jacket.

Houdini went about devising a method of escaping from one and sure enough he discovered it. In his original routine he would be strapped into the jacket by members of the audience and then step behind a curtained cabinet. The reaction was not quite as strong as he expected.

His brother Theo Hardeen, stumbled upon the idea of presenting it without the curtain. Hardeen would present the escape in full view for all to see. It was a hit. Houdini adopted the same idea and it became a hit for him as well.
His most amazing adaptation was hanging upside down from a building in the straightjacket. This idea of hanging upside down was not Houdini's however, he got the idea from a young fan from Sheffield England. The story is told in full in the Patrick Culliton book, Houdini The Key. (click the link and order the book if any are left)

His ultimate trick has become legend. The Chinese Water Torture Cell. Many people still think that Houdini died in the WTC because that was the Hollywood ending in the Tony Curtis HOUDINI movie. But Houdini presented the trick probably hundreds of times if not more. He ALWAYS escaped!
It's kind of a combination of his previous effects. You've got the water element from the Milk Can and the upside down element from the StraightJacket escape but the enclosed element from another of his previous effects the Glass Box Escape. All together it made a frightening effect. There were several different posters for this Houdini effect. The most famous one is on the right. 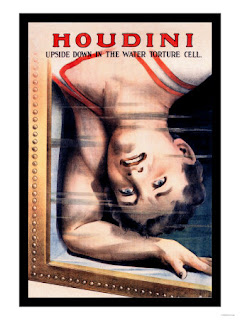 There is a fantastic article on John Cox's Blog about 'The Two Water Torture Cells'. This is a must read. Now, as to the effectiveness of the WTC today, let's put it like this, it's still being used by magicians. Doug Henning solidified his star on TV by using it on his first special in the 70s. David Copperfield presented an unusual version of it in the 80s. Criss Angel also used the WTC early in his TV career to make a name for himself. But to my mind the most effective presentation I've seen of the Water Torture Cell was presented by Steve Baker, also known as Mr. Escape. The video above is of one of Steve.

Sadly, both the Straightjacket escape and the Water Torture Cell have been overdone by magicians, so much so that they no longer seem to hold the impact that they once had. Now there are exceptions to the rule. One exception I can think of is from the couple Ridgeway and Johnson also known as Living Illusions. In their version of the WTC, the cell is cylindrical and completely see through. Also, their version features a female, Kristen Johnson as the escape artist rather than the male. And finally, they do it in full view. These alterations to the escape have made their routine unique to them.

The straightjacket has been done right into the ground. It is rarely presented as an escape anymore, most of the acts use it as a comedy piece, thus diminishing the allure of the effect even more. The Upside Down Straight Jacket Escape surely seems to thrill, but it doesn't draw the crowds anymore that Houdini did in his day.

The material from Houdini's act was powerful in his time and as you can see, is just as powerful today which is why entertainers still use his material almost 85 years after his death. He obviously presented it as the true showman he was. Even Dai Vernon who disliked Houdini admitted his Needle Trick was well done. Houdini may not have been a general practitioner but with the effects in his regular act he became a legend.

Tomorrow, a slightly different take on the MAGIC of Houdini...
Posted by Carnegie