The Heart of Houdini's Magic 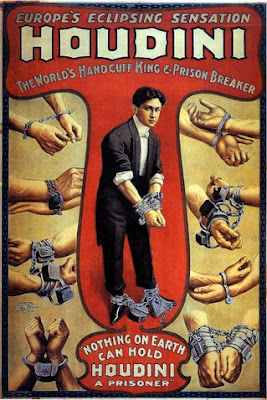 It's right there in that poster, the secret. Whether you call it magic or escapes, it's impossible to deny the impact the Handcuff Escapes had in Houdini's career. In fact, they made his career. When Martin Beck saw Houdini at the PalmGarden in St. Paul MN, he thought the act was awful with the exception of the Handcuff bits. I'm not totally sure what handcuff routines he was even doing but whatever it was that alone impressed Martin Beck. From that point Houdini changed his act to all escapes and history was made. 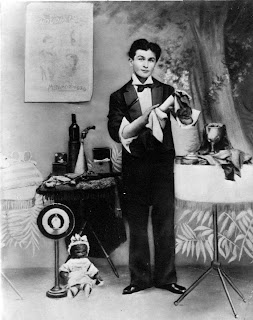 We know he had been using handcuffs early in his career. The famous photograph of a very young Houdini surrounded by standard magic props of the day also shows a pair of handcuffs to the very far left of the photo. In the photo is a pair of Bean Giant Handcuffs, impossible to get out of by yourself even with the key. But Houdini devised a method to escape from the Bean Giants, as well as hundreds of other pairs of cuffs.

The handcuff act has been copied many times since Houdini's time. Truth be told, Houdini did not originate the Handcuff Act either, but he did popularize it. I don't think anyone since Houdini's time has gotten the real notoriety from the Handcuff Act that Houdini did. I know a lot of escape artists. Everyone of them can get out of cuffs. Is it that the Handcuff act doesn't impress people? Perhaps. I don't mean to say that escape artists cannot entertain, as I know they can. My point is that Houdini used it to launch himself into stardom, while all others may have had success, even very profitable success, but none has achieved the lasting acclaim in the eye of the public. 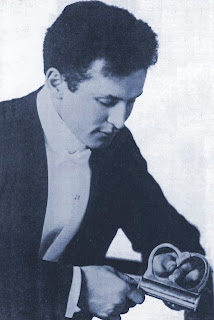 Houdini also added the element of the CHALLENGE to the handcuff act. Anyone could bring a pair of regulation handcuffs that were in working order and challenge him. He of course had the choice to decline the challenges at anytime. One of the challenges he accepted was with the infamous Mirror Cuffs. History has opened the door on this mystery and it appears that Houdini probably set this up from the beginning. But still, the story of the Mirror Cuff Challenge and Houdini's attempt to escape was simply incredible. Even within the midst of the story there was something that happened that almost trumps his actual escape. Houdini had asked to have the cuffs removed so that he could take off his jacket. The officials said that could not do it unless Houdini admitted defeat. So Houdini somehow reaches into his jacket, removes a pocket knife and proceeds to CUT the jacket to shreds right there in front of the crowd. That's worth the price of admission right there! But I've always wondered, how did they let him get a pocket knife into his jacket, didn't anyone examine him for tools?

The Challenge Handcuff Act morphed into the Challenge Escape Act. This too was a Houdini innovation and again, though people have used the concept since Houdini, I don't think anyone has ever gained the fame that Houdini achieved. I tend to think that the idea works best when you are already famous, but it doesn't work so well as a method to become famous. That's just my opinion.

Did you figure out yet that the secret in that poster is not the handcuffs? The secret to the Heart of Houdini's Magic was "Nothing On Earth Can Hold Houdini A Prisoner". The perception that nothing could hold Houdini was the allure and the appeal to his act. He was someone who could do the impossible. Which I think has something to do with why his straight magic wasn't always the strongest because audiences knew those things were tricks. They wanted to see him do the impossible, which is what he was known for.  Frankly, if you go back and read the 'Borrowing From Houdin' blog, you'll see that Robert-Houdin's version of the Crystal Cashbox was MORE Houdini than Houdini's version. Robert Houdin borrowed normal objects, had them marked, did the impossible with them and then returned them. Houdini missed the mark with that straight magic trick by not being true to his challenge like nature.

Houdini took ordinary objects, chains, ropes, wooden boxes, locks handcuffs and did the impossible. But when he brought out something that was clearly not ordinary, in other words a magic prop, then it diminished the power. When he stuck with ordinary objects he excelled, like the Needle Trick, like Walking Through A Brick Wall, and to some degree even the Vanishing Elephant because the emphasis was more on the Elephant than anything. He used the ordinary to become extra-ordinary, so it appeared he could do his style of magic with anything.

One other thing about Houdini. If he was such a bad magician, why has every major magical name in the last 30 years borrowed from him? Perhaps if you think Houdini was a bad magician, well then he fooled you yet again! Man that Houdini is tricky!

I hope you've enjoyed my little blogs on Houdini. I'm going to take a break for the rest of the year (at least that's the plan, I might change my mind). I'll be back in January with more Houdini stuff and more magic history blogs! Until then Merry Christmas, Happy Holidays and Happy New Year!
Posted by Carnegie