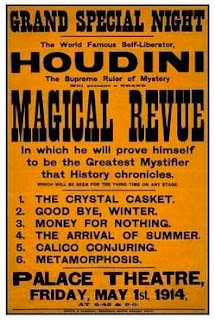 To dispell the rumor that Houdini wasn't a very good magician, I'm showcasing some of Houdini's greatest effects and posting videos of them being performed. Most of the videos are modern day performers doing the effects however. But this also goes to show the solid entertainment value in the routines and how they stand the test of time.

Walking Through a Brick Wall. This is clearly not an escape. For the time it's also more than a magic trick. It seems to be an impossible feat of super human ability. The brick wall is built on the stage by brick layers. Members of the audience check out the brick wall themselves to be sure it's legit.  The audience members stand in the back and around the sides. Houdini stands against one side of the wall and a partition or cover is placed over him and over the exact same area on the opposite side of the wall.
A short time later, Houdini steps out from the partition and is on the other side! Billboard Magazine said that the audience was often so spellbound that sat silent for two whole minutes, they were so astonished they forgot to applaud! This was one Houdini effect that warranted it's own poster but never got one.

The Walking Through a Brick Wall was not without controversy. Houdini purchased the rights to it from Sidney Josolyne. But P.T. Selbit claimed the trick was his and was stolen by Josolyne and Houdini. In "Houdini-The Key" by Patrick Culliton this story is brought to light in a way I've never heard before. It's fantastic. Regardless of the controversy, it's now history and Houdini did Walk Through A Brick Wall!

The video above of Walking Through A Brick Wall is done by the Spensers who are fantastic. However, it is VERY different from Houdini's version.  Both Doug Henning and David Copperfield presented versions of this effect on their TV Specials. Copperfield walked through the ultimate brick wall, The Great Wall of China. 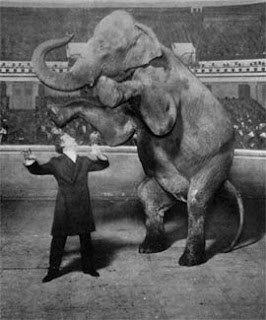 The Vanishing Elephant. An incredible illusion that not many people saw, even those in the audience. But what a reputation maker! Houdini appeared in the newspapers with this elephant saying he would make it vanish on the enormous stage of the Hippodrome Theatre. The elephant stepped inside a very large box. The magic words were spoken (probably) and the front door and back door were opened to show that the elephant was GONE! From what I understand it was a killer effect if you were in the middle of the audience! The people on the sides were unable to see inside the box.

Since then, a number of methods have been developed to make an elephant vanish, but Houdini was the first. The video is of Doug Henning making an elephant vanish on Broadway. I think the best version was done by Siegfried and Roy and their method was created by Guy Jarrett.

As you can see, these effects made popular by Houdini, still hold up today. Magicians know the publicity value of these effects, which again shows that Houdini too knew which was why he used them. Still think he was a bad magician? More to come...
Posted by Carnegie