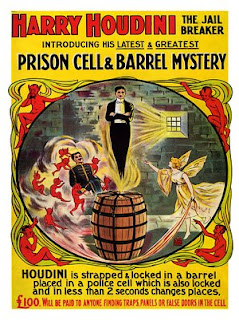 I have seen this poster in many Houdini books in the past, but I've never really taken a good look at it until recently. It's clearly a different routine for Houdini, but not one he seems to have kept. It dates to 1906 when Houdini finished a run in Boston in March of that year. He decided to take out a show of his own along with several other acts in the line-up. His feature, The Prison Cell & Barrel Mystery along with some handcuff escapes. He closed the show in May of the same year, so it had a VERY short run.

The description at the bottom of the poster gives away the effect which seems to be identical to the Metamorphosis/Sub Trunk, except with different props. In 'Houdini-The Key' Pat Culliton mentions that Houdini got this barrel from his former partner Jacob Hyman.

Mike Caveney and Stan Allen used to perform the Sub/Trunk years ago using a barrel as well. I don't think they did the 'prison cell' part, they just used a curtain.

I just read in an old issue of the Sphinx Volume 38 and article by Hardeen. He says that at one time he performed as Theo Houdini doing a Barrel Escape. Houdini asked him to change his name and came up with Hardeen for his brother so it wouldn't be confusing to audiences. I wonder if the Barrel Escape was from the routine above?

UPDATE: There is apparently a second Prison Cell & Barrel Mystery Poster. This one is a three sheet poster. It can be seen in the photo below, however it is on the far right hand side. I don't think this poster survives today however. There are also no complete frontal images of the poster, only this angled shot. Perhaps one day it will turn up. 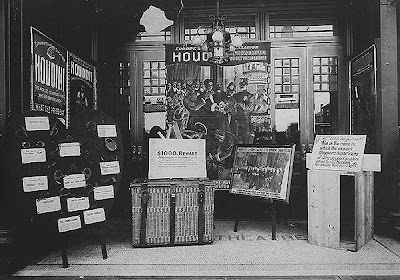