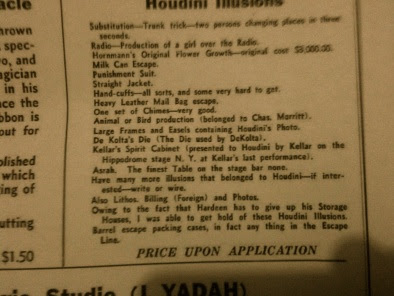 I must say, the AskAlexander.com site is truly a wonderful resource. While looking up information on the Prison Cell & Barrel Mystery, I came upon an ad in an old Sphinx Magazine. I could hardly believe what I was reading. So I pulled out my old magazines and searched that issue, which I had. It's just an advertisement there was nothing else in that issue about the Barrel, but what a find!

Near the bottom of the ad it says "Owing to the fact that Hardeen has to give up his Storage Houses, I was able to get hold of these Houdini Illusions" Look at what is on this list, The Milk Can, The Sub Trunk, Straight Jackets, The Radio Illusion, The Barrel Escape, The DEKOLTA DIE!!!!, Kellar's Spirit Cabinet!!! I mean wow, my head is about to explode thinking about the historical value of this stuff. The Company is Royal Magic Studio (J.Yadah) on 167 North 7th St. Brooklyn NY.  I don't know enough about the old NY Magic Dealers to know who this is exactly. But he apparently picked up a treasure trove of stuff from Hardeen. This ad appeared in the Sphinx in 1934, several years before Hardeen gave the bulk of his collection over to Sidney Radner.

There is one item on here though that kind of stood out to me more than the others. The Hornmann's Original Flower Growth, with the original cost listed at $3000.00. Ladies and Gentleman, I think I've got this one covered, below is what I believe is a photo of that very prop. It resides in the collection of Ken Klosterman today. I took a photo of it when I was there because I was quite struck with the fact that Houdini had a Flower Growth in his show. It's quite the piece. I wish I knew where Kellar's Spirit Cabinet and the DeKolta Die were today. Of course there are a couple of Sub Trunks out there in various collections, as well as Straight Jackets. Oh, I'm also wondering how many MilkCan Escapes there were. I know of at least three. One is in Copperfield's Collection, One is in the Lund Collection which is currently on display at the Houdini-Art& Magic exhibition. The third is one I saw a few years ago on Ebay, which looked like it may have been a prototype, it had a similar shape but it was smaller than the other cans.

At any rate, please enjoy this picture of Houdini's Flower Growth, original cost $3000. 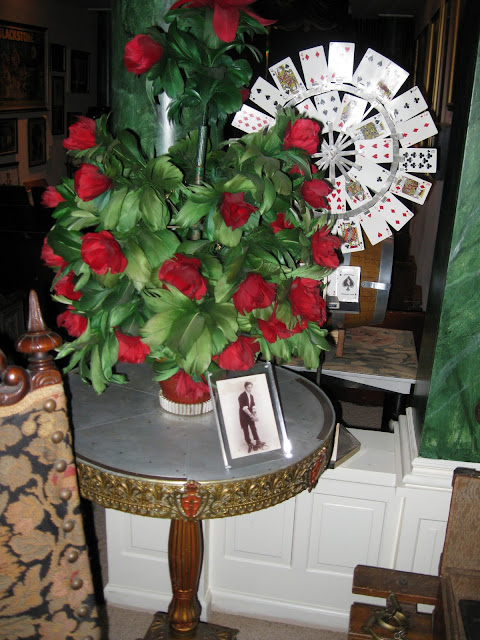