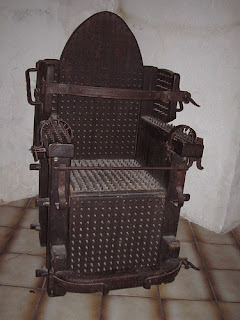 During Houdini's run in Boston 1906 he offered a number of exciting one of a kind stunts to his audiences. I found in the Silverman book a mention of Houdini's escape from a Witches Chair. Though, from the description 'an iron out house', I think perhaps the device was a Tramp Chair. Both would make interesting escapes. Both are devices that could be found in the New England region. I learned from Norman Bigelow that Hardeen presented an escape from a Maine Tramp Chair at one point. 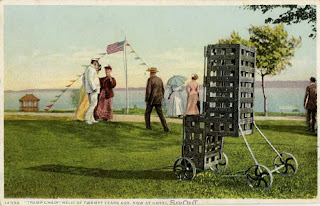 The top photo is an actual Witches Chair. It's a torture device to get witches to confess that they are indeed witches. The Tramp chair was usually in the shape of a chair with an iron cell built around it. This was invented by Sanford Baker of Oakland Maine which is why I'm sure it's often called a Maine Tramp Chair. 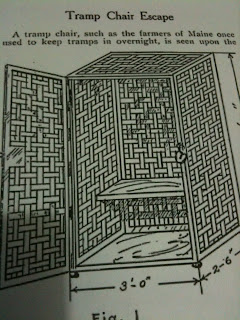 Now take a look at this picture from the Secrets & Mysteries booklet put out by 'OUDINI'. Notice the shape of the device matches the description from the Silverman book, 'an iron out house'. My guess is that Houdini made his escape from some version of a Maine Tramp Chair rather than a Witches Chair.
One other note of interest. The address to Keith's New Theatre where Houdini performed was 547 Washington St. Boston. There is an address on the cover of the Oudini book which is 230 Washington St.

The new Culliton book says that Oudini was really Frank Rowan and was an actor. I noticed the drawings used for the book are the same as some I've seen in other Houdini books.  Was this really Houdini drumming up more controversy to sell tickets? I'm sure all these things were revealed long after Houdini performed them. Either that, or given the fact that Rowan was an actor, perhaps he had access to these contraptions. The Oudini book lists the Iron Boiler Escape, The Glass Box escape and others that Houdini did perform in Boston.

***Just found a little bit more out about Hardeen's Tramp Chair Escape. He was performing at the Bijou Theatre in Bangor Maine when he was challenged by the Director of Public Safety. Hardeen claims he had never seen nor heard of the device before. The following night the Tramp Chair was brought to the theatre and Hardeen was locked up in it. He escaped in 11 minutes 54 seconds. 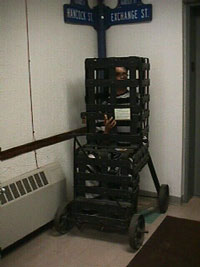 I discovered there is a Police Museum in Bangor and within the museum is a Tramp Chair. I can't help but wonder if this is the very chair that Hardeen was challenged with. 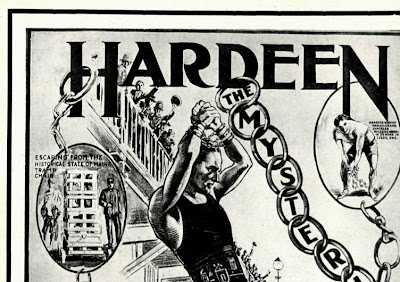 ***One finale update: Take a look at the left side of this poster. You'll see the Maine Tramp Chair that Hardeen escaped from!