The more I research Houdini, the more fascinated I am at all the connections he has to various parts of the country (and even the world). Case in point is Omaha, Nebraska. As it turns out, Omaha is the first city that Houdini performed in after meeting Martin Beck in St. Paul MN. Beck, was a theater owner and booker, and he witnessed Houdini's feats at a Beer Garden in St. Paul. On March 14th, Houdini received a telegram from Martin Beck sent from Chicago. The telegram says, "You can open Omaha, March 26th, at $60, will see act, probably make proposition for all next season." Houdini records in his journal "This wire changed my whole life's journey."

Notice that Beck says, "will see act, probably make proposition for all next season." I wondered about this statement because Beck was supposed to have seen Houdini in St. Paul. Then I remembered that the story is often told that Beck suggested to Houdini to 'drop the magic, keep the escapes and the box trick'. This story first appears in the book HOUDINI His Life Story by Harold Kellock and is repeated in later biographies. It's also pretty accurate as to what happened with Houdini's act. So Omaha, would have been Beck's chance to see the NEW act, and based the potential of a future tour on that. Omaha then begins Houdini's new career and new life.

Here is a glimpse into that 1899 performance in Omaha. Houdini was performing at The Orpheum and on April 8th, a clever situation took place. The manager of the Orpheum had a bet with 5 businessmen in town that they couldn't produce a pair of cuffs that would stop Houdini. One of them came up with something I've not heard of before, a pair of cuffs with a 'time lock' on it. According to the article in the April 8, 1899 edition of Omaha World Herald, it would take no less than 60 minutes to get out of this pair of cuffs due to the time lock. Houdini was free in 4 minutes!

Fast forward one year, April 1900, Houdini was back on Omaha.  Way back in St. Paul a year prior, the act was The Houdinis. But now the act is HOUDINI, with Bess assisting in the Metamorphosis, when it was actually presented. Instead, Houdini, now The Handcuff King, was taking on challengers all over the country. Her role, which was pointed out in The Secret Life of Houdini by William Kalush and Larry Sloman, had been greatly reduced.

A side note to Houdini's visit in 1900, according to the Omaha World Herald April 20th, 1900 edition, Houdini was taken to a party by his many fans in town. While there he presented numerous magic tricks, card tricks and even his East Indian Needle mystery.

Houdini would return to Omaha numerous times. But during one of those encounters he met David P. Abbott. Mr. Abbott was an amateur magician and popular among professional magicians because of his inventiveness. Mr. Abbott is responsible for teaching the Floating Ball to both OKITO and Thurston. He didn't invent it, but he embellished it and made it the popular trick it became. Abbott also wrote an amazing manuscript called, "David P. Abbott's Book of Mysteries." This was a manuscript almost lost, almost never published. The dramatic story of it's eventual publication is chronichled in Volume 2 of The House of Mystery by Teller and Todd Karr (a must read). By the way, the House of Mystery refers to Abbott's home in Omaha that was totally tricked out in order to perform unbelievable magic. The book shares the various secrets of the home.  Harry Kellar visited the home at one point and was so taken by the magic, that he asked Abbott to help him do the same thing to his Los Angeles home!


You will notice that the photo at the top of the page is of Houdini and David P. Abbbott. They were friends at one time.  However, that friendship became rather rocky when  an October 1922 article that Houdini wrote for POPUAR RADIO Magazine, included an exposure of Abbott's Famous Talking Tea Kettle Mystery. Abbott was furious with the exposure. Houdini later claimed it was not his doing but an editor for the magazine who included the secrets.

Now before I get too far into things, I've got to back up to explain some facts that aren't well known. First, the Talking Tea Kettle was actually the creation of a man named Phillip Meyers, an inventor who was interested in magic, but later became interested in and started creating effects for fake spirit mediums. This is according to Todd Karr, one of the authors of the book The House of Mystery. The Tea Kettle that Meyers built however, didn't get much use and it was eventually gifted from Meyers to his friend David Abbott. Mr. Abbott recognized the amazing effect but streamlined the methodology, which is why it is now known as David Abbott's Talking Tea Kettle.

Remember, Abbott was furious with Houdini's article. Houdini later made two unusual claims, first he said he purchased the Tea Kettle from an auction of a mediums estate. This statement was false. He actually purchased the Tea Kettle from Clyde Powers the magic dealer who had obtained it from Carl Rosini. This again, is documented on pg 482 of The House of Mystery Volume 2. So Houdini did not buy this from an auction. 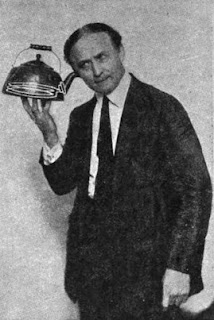 swindle and con their clients. This was also false. David Abbott himself stated he never sold a Tea Kettle to any fake medium. I'd like to stop here and offer my opinion. Having seen some of the scrapbooks that Houdini had on mediums and spiritualism, and knowing the volumes of information he collected on the subject, I wouldn't be surprised if he truly thought he picked up this kettle in an auction. Clearly it would be remembering it incorrectly, but it's possible. But the second half of this issue, the claim that mediums had used the Tea Kettle to defraud, is one I'd like to address a bit more. Remember what I said above, Phillip Meyers, the first inventor of a Talking Tea Kettle was making props for Fake Spirit Mediums. Houdini likely was aware of this, and aware of the Tea Kettle's origins. So if you put 2 and 2 together, it is only logical to assume that Tea Kettles were made for fake mediums because Meyers was already in the business of building similar things for that unscrupulous bunch. Of course, the other option is that it's possible Houdini was just using all of this for his own benefit, but I'm actually siding with Houdini on the later point. The first point, of where he got the Tea Kettle, well that could go either way.

The article in Popular Radio titled Ghosts That Talk--By Radio authored by Houdini, really does give an exposure of the Tea Kettle in the body of the article. Actually, the title of the article is exposure enough, lol. But the editor of the magazine spells it out even further. Then the magazine uses photos that they artistically rendered to show the secret workings. I'm sure Houdini merely provided regular untouched photos, it was the magazine that drew in the schematics of the inner workings. Despite the exposure the magazine was actually incorrect in the way they claimed the trick was done. My friend John Cox over at WildaboutHoudini.com wrote an article on The Tea Kettle Controversy back in 2012, which gives more details on this uncomfortable moment in Houdini's life.

The LAST APPEARANCE IN OMAHA 1923

Houdini once again is thrilling audiences at the Orpheum in Omaha. He adds the hanging straitjacket escape this time around. He hangs upside down on September 6th, 1923 from the Omaha World Herald building. The paper gives a great account of his escape and mentions that upon lowering Houdini to the ground he had a 'brief spell of faintness.' The day before the paper was promoting his straitjacket escape and within the small blurb was this little gem, "Houdini is appearing at the Orpheum this week, and announces he may quit the theatrical profession after completing his present tour of the world." 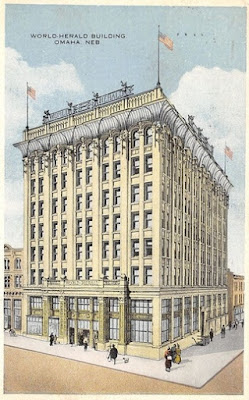 WHO GETS THE CREDIT?

We know Houdini began the new phase of his career in Omaha because of Martin Beck. However, there was another person who was taking credit for this as well.  In the Sept 24th edition of the Omaha World Herald there is an article that says, "Two years ago Harry Houdini, famous the world over as the "handcuff" man, came to Omaha unknown. He became a protege of Dan Baldwin, the strong man and genial police officer, and through his influence was launched upon his present career." Later in the article they reprint, word for word a letter Houdini sent to Baldwin about his tour of Europe. I'm not familiar with Dan Baldwin. A cursory look through the various Houdini bios came up with nothing. Perhaps this will be another case for The Magic Detective, but for now, I hope you enjoyed Houdini's connection to Omaha!