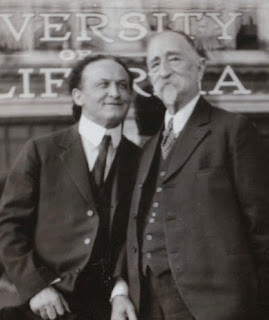 I have written about this man before, but recently have a new found interest in him because he has become part of my show. First, he became part of my Houdini lecture, but now he is in my new ASTONIFY Show.

Professor Horatio (Harry) Cooke was a remarkable man. He served in the Civil War, he was one of Lincoln's Federal Scouts, he was witness to the assassination of President Lincoln, and later he became a mentor of sorts to Houdini and many other magicians in the Los Angeles area. He was also, one of Harry Kellar's pallbearers.

Harry Cooke had long been forgotten until he was rediscovered by Mark Cannon in 1981. Mark met one of Cooke's daughters while performing at her senior citizen center. In April 2006, Mark wrote a great article in MUM Magazine all about the life of Harry Cooke.

Prior to this rediscovery, Cooke could be found within the pages of The Sphinx and other magic magazines. He was often dubbed 'The Oldest Living Magician in America'. I knew from the Cannon article and from other sources that Harry Cooke performed magic following the end of the Civil War. His favorite trick was the Linking Rings. For a number of years his show was called SPIRITUALISM Without the Aid of Spirits. Well, imagine my surprise as I'm watching the Potter and Potter Auction on Saturday last, and up comes a handbill belonging to none other than Professor Harry Cooke. The moment I saw the name, I jumped and started bidding. It may be one of my most favorite auction wins! Now that I own this wonderful item*, I'm going to alter my Cooke story yet again. And it will help me to adjust the 'spirit' portion of my Astonify Show.

The one thing left that I wonder about is whether or not Harry Cooke was a descendant of the Mayflower Cookes? Given that he was born in Connecticut, I'd say the chances are pretty high.