How ironic is it that almost 100 years later, Houdini would be making a movie debut on television. His recently rescued and restored movie The Grim Game airs tonight on Turner Classic Movies(TCM). The story of how it was recovered and restored has been covered many times and on many websites. And, it has been shown to probably thousands of people now. It first made it's debut at the TCM Movie Festival earlier in the year. Then it was shown in various locations across the country.

A lot of magicians have seen the movie at this point, because it was shown at a major magic 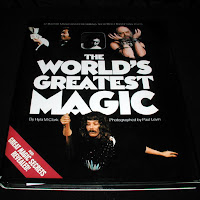 convention. I however, being the recluse that I am, have not seen it. Actually, I haven't seen it mainly because my performing schedule this year has not allowed me the free time to venture out and see it. I came really close a few months ago when Dick Brooks and Dorothy Dietrich had a showing in Pennsylvania, but even that I was unable to swing. So, for me, the Magic Detective, I'll be seeing The Grim Game for the first time ever! It's pretty wild too considering one of my all time favorite Houdini posters, was actually a poster for this movie. Years ago there was a book called The World's Greatest Magicians by Hyla Clark, and within the chapter on Houdini, was this incredible full color poster of Houdini in a straitjacket, hanging upside down from a building. The colors and imagery were captivating and still are. (see image below)

Now, tonight, everyone who has access to TCM has the opportunity to see Houdini at his best. Many reviews that I've read point out that this was by far Houdini's best movie. And others make a point of saying that Houdini was actually a very good actor, contrary to what some have said about his other movies. To me, it doesn't really matter. All that matters is this chance to see Houdini in action. The mind conjures up so many images of what a person could be like when you read books about them, but to see them captured on film it adds another dimension. Yes, I have seen the other Houdini movies, and I enjoyed them all. But THIS movie, The Grim Game was the one I always wanted to see and precious little remained of it, until now.

Who do we have to thank for all this? Larry Weeks for holding on to the only surviving copy of the movie all these many years. Dick and Dorothy of the Houdini Museum for their tireless work in getting this movie back out to the public. Without their efforts, it's possible we would never see the movie. Rick Schmidlin, the restoration producer, and TCM for all their efforts behind the scenes and for bringing the movie to national prominence. There are others to thank as well, like ALL the Houdini blog writers who wrote stories of this movie and have continued to promote Houdini so many years after he passed on. And all the Houdini fans that continue to keep his spirit alive!
Thank you all!

UPDATE: I can now officially say I've seen The Grim Game. Wow! What an enjoyable flicker. And the music score that some have said is repetitive, is SO REPETITIVE! Whoa! Now the next showing at 11:45pm will have a different score, so I'm going to set the DVR to record that one and watch it tomorrow. I'll put up my review of the movie once I watch the other version. 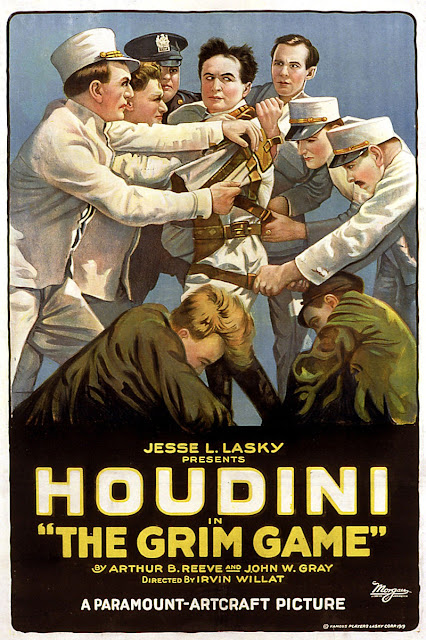