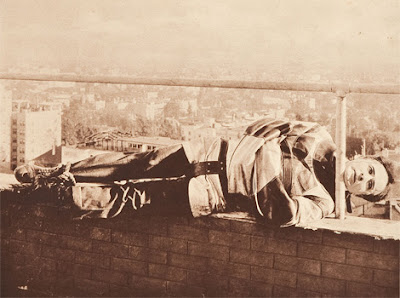 I've now officially seen The Grim Game. Actually now I've watched it three times. What an interesting movie. It's always exciting seeing Houdini in action. And it's even better seeing so many of the iconic photos of him come to life. For example, I never realized that the image of him in a straitjacket on the ledge of a building was actually from this movie. It's always been an incredible photo but now I've watched the whole scene.

As a silent film, I really enjoyed The Grim Game. Some of the story descriptions however seem a bit off to me. The IMDb website says "Jailed unjustly for a murder he did not commit, a young man uses his amazing powers of escape to free himself and pursue the actual killers, who hold his fiancée captive." While this is somewhat true, the facts of how he was jailed are quite different. 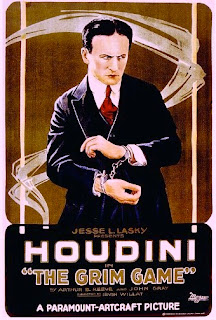 Houdini plays a character called Harvey Hanford who is the star reporter for The Daily Call Newspaper. The newspaper is struggling financially, and Hanford concocts a fake story idea to drum up some interest in the paper. But along the way, his plot goes horribly wrong and the three fellows who are in co-hoots with him, basically double cross him. Part of Hanford's plan was to end up in jail and later be exhonerated. But his three accomplices realize it's a great opportunity for each of them to take advantage of the situation and pin the blame on Hanford.

There is a lot of action in this movie. Houdini does a lot of escapes in the movie too. Early in the film, some of his fellow reporters handcuff him while he is napping in the newsroom. He wakes suddenly to find himself confined, but he frees himself to their astonishment. Later in the movie he does another multi-handcuff escape and in addition frees himself from a jail cell by scaling down the wall. No safety line for ole Houdini, he's doing all his own stunts and they're quite amazing.

The one stunt he does not do is the mid-air exchange between the two airplanes. But having watched the scene and realizing that these are propeller driven planes, whoever that stuntman was, sure was brave (or crazy). The mid-air collision of the two planes was an accident that was captured on film and later incorporated into the story.

There were a few moments in the movie I especially liked. There is a scene where the  security guard for the Cameron Estate shows up with a shotgun and corner's Houdini. Then Houdini with his hands up, has a pistol pop out of his sleeve and he overtakes the guard. Pretty cool bit of sleight of gun there.

Another scene that I got a kick out of is later in the film where Houdini takes a sword away from a fellow while they're fighting and Houdini throws the sword across the room which impales itself into a wall, right next to the face of a woman. Pretty startling little effect there.

Seeing Houdini though do his escapes is the best part of the film, and these include: handcuffs, jails, straitjackets and ropes. I also enjoyed the playful quality Houdini shows on film which is quite different from the often super serious images of him in photographs. It helps to make Houdini more human. I frankly thought Houdini was a fine actor, in fact, better than the other males in the film who were prone to a lot of over-acting. Houdini came across quite natural and believable.

If you've not seen The Grim Game, you should watch for a reply by TCM. I enjoyed the second showing of the movie with the alternative soundtrack. The music fit the action much better whereas in the other score the soundtrack became repetitive and at some points worked against the movie.

The Grim Game, two thumbs up from me!

By the way, it was very cool seeing John Cox-Wild About Houdini mentioned in the Special Thanks column. Also, was glad to Dick Brookz and Dorothy Dietrich were mentioned during both showings on TCM and they also make it into the Special Thanks credits as The Houdini Museum!
Posted by Carnegie