Some Grim News, But It's All Good 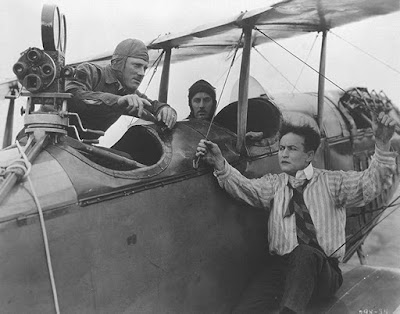 Sunday Night, TCM will be airing for the first time EVER, Houdini's greatest movie The Grim Game. You will be witnessing history in more ways than one. Of course, the first showing on TV is history making in itself. From what I understand the first showing at 8pm will have the same score used in the previous viewings of the movie this year. That score was done by Brane Zivkovic under the supervision of Rick Schmidlin, the restoration producer. However, the second viewing at 11:45pm, will contain a new score done by Steve Sterner. Mr. Sterner is known as The Piano Man of the Silent Screen. Why? Read on.

Apparently, the one complaint with the early viewings, was that the score of the movie was a bit repetitive. This was first brought up by Dorothy Dietrich and Dick Brooks during an early version of the restoration. They made suggestions but apparently were ignored.

During the original showing in Hollywood, the praise for the movie was universal, and the one negative point was the repetitive score, which most agreed was very good at times, but needed more to it. So now, on October 18th, you get a chance to hear the first score at 8pm and then the newer score at 11:45pm. Set your DVRs it's going to be one great night for HOUDINI!

There was a lot more drama that went on behind the scenes while trying to get this movie restored. To read more about what went on, check out what Dick Brooks and Dorothy Dietrich had to say. They were instrumental in getting this movie out to the public and frankly, we would likely not be watching it at all if it were not for their efforts. They have done an incredible amount of fantastic work keeping HOUDINI's name alive and thriving into the 21st Century!
Posted by Carnegie