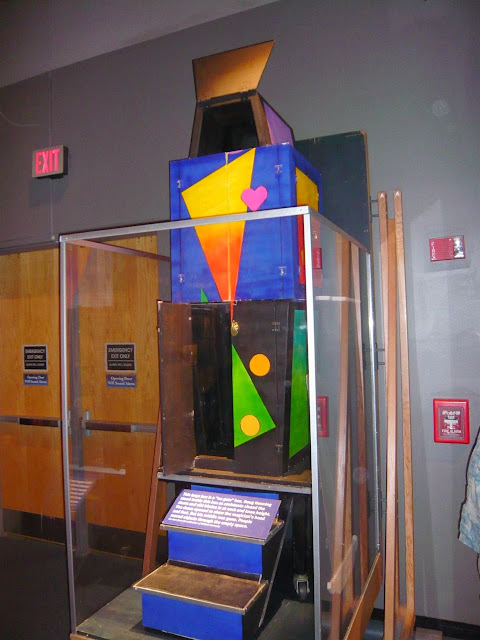 The very first prop of this kind was created by P.T. Selbit and was called The Man Without a Middle. His version was quite different from what many are used to. In the Selbit version, the entire middle section of the box is removed leaving the head section to be held up by two poles.

The next version to come along was created by Carl Owen when he worked for Thayers. He called his version 'The Disembodied Princess' and his version was a vast improvement on the original because the methodology was simplified. In the Carl Owen version, the top door would show the girls head, her legs could be seen in the two sections below. Two large blades would pass through her neck and waist and then the middle box was opened to show that part of her body was gone, even though the legs and head could still be seen.

In the book, P.T. Selbit Magical Innovator, the authors Eric Lewis and Peter Warlock comment that if Selbit had never created The Man Without a Middle Illusion, then Robert Harbin would never have developed his Zig Zag Lady. The Zig Zag was Harbin's way of creating a similar effect with even more advancements.

Getting back to the Doug Henning prop, this was developed because Doug was appearing in a number of 'Theatres in the Round' and they were unable to do the standard Disembodied Princess due to site issues. So 'Seeing Through Surrounded' was built to allow a view of the prop from any angle. A full description of the prop along with it's inner workings appeared in a small booklet called Square One put out by Stan Allen of MAGIC Magazine.

I had read Square One and was instantly fascinated by the line drawings of this prop but was never fortunate enough to see it in action. Imagine my surprise while visiting a Science Museum in Tampa Florida to come upon a large touring feature called The Magic of Science, and among the items on display was this prop once owned by Doug Henning.
Posted by Carnegie