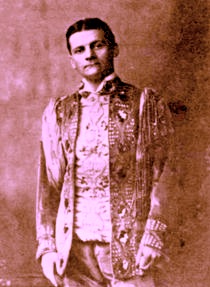 The article about Beauty & Lafayette turned out to be very popular. I thought my readers might enjoy a little more information about the man who was once Sigmund Neuberger. If you read the other blog you know that The Great Lafayette died tragically in a theatre fire. But it turns out that was not the first fire that Lafayette was involved in.

On December 25, 1905 in Youngstown Ohio the private railroad car that belonged to Lafayette caught on fire. He had two private railroad cars, one a private residence the other for scenery and props. He spent thousands of dollars on the construction of his private rail car. The car contained a reception room, dining room, sleeping room, kitchen and bathroom. At the end of the car there was a horse stable and room for his automobiles. In the reception room there was a fireplace, this is apparently where the blaze began. Lafayette and also his animals were not in the rail car when it caught on fire. Lafayette's rail car also caught two other rail cars, belonging to the Pennsylvania Railroad Company, on fire. The estimated damage to his rail car alone was $10,000. Lafayette carried no insurance.

The Pennsylvania Railroad Company sued Lafayette for the damage done to their rail cars. They received a whopping $500 for their trouble.

Another interesting thing I uncovered is how from 1911 to 1924 there were 'sightings' of Lafayette. This led some to conclude that perhaps he had not perished in the great theatre fire but instead had fooled the public yet again. These sightings of course can go in the same category as today's "Elvis Sightings", but they still make for an interesting story. There is no doubt that Lafayette died in the Empire Theatre fire on May 9, 1911 when he returned to the theatre to try and save his horse.

A photo of the funeral procession can be seen here http://www.edinphoto.org.uk/0_a_o/0_around_edinburgh_-_piershill_cemetery_lafayette_funeral_procession.htm
Posted by Carnegie