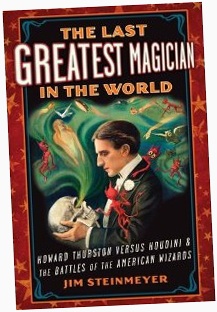 I just finished reading "The Last Greatest Magician" by Jim Steinmeyer. This is the recent biography that Jim did on Howard Thurston. It's been sitting on my shelf for a while, wanting to be read but NOT being read. The main reason was that so many others were reading and giving reviews that I wanted to hold off until it all calmed down a bit.

My favorite books are biographies. I have a huge library of biographies of famous magicians. Naturally there are more Houdini titles that anything else, but the second largest group are books on Thurston. Not all are biographies, but there are a few Thurston titles which include: My Life of Magic by Howard Thurston, The Complete Life of Howard Franklin Thurston V 1-2 by Robert Olsen, The Howard Thurston Illusion Show Workbooks V. 1-2, My Magic Husband by Grace Thurston and there are a few other titles I don't have in front of me at the moment.

Much like when the Kenneth Silverman book came out about Houdini and set much of the previous records straight and then the Bill Kalush Biography came out and altered some ideas we all had about Houdini, Jim Steinmeyer's book does the same thing for Thurston. He was not the squeaky clean upstanding citizen that some of his other biographies try to paint him. Thurston was a bit of a scoundrel who spent the later part of his life trying to make up for the seedier life he led in his younger days.

It's almost impossible to write a book about magic from this time period without mentioning Houdini and he is mentioned a few times in the this book. He and Thurston were essentially 'friendly enemies' and I think that term is used in the book. But this is a book about Thurston, coming from a Thurston perspective so anything said about Houdini comes from that point of view and as it should be in this case.

I personally loved this book. In my opinion it's the best biography that Jim Steinmeyer has written. Hiding The Elephant and Glorious Deception were both good, but to me this book on Thurston was exceptional. My only issue, I disliked reading all the methods behind the magic. I would not have minded one or two revelations, but I did not like the constant revelations of effects. In some cases I think it added to the story, as in the description of the Indian Rope Trick. The methods and trials and tribulations to get that effect on the stage were fascinating. But there were others that I really am sorry were given away. I'm sure Mr. Steinmeyer hears this all the time from the magic community. I'm not suggesting he be thrown out of the magic world for revealing tricks though. As I mentioned, in some cases reading how an effect worked added another layer to the story, but in other cases I didn't think it was necessary.

I find it so interesting to see these people for who they were, warts and all. Thurston had the biggest magic show of his time, yet he was always in need of a loan to stay afloat. The face lifts he had come as no surprise though and one can hardly fault Thurston for doing what 90% of Hollywood does. Thurston's approach to magic and his big show was quite revealing. Equally as revealing was his terrible lack of business sense when it came to other issues related to his show. Jim Steinmeyer did a fantastic job bringing the real Howard Thurston to life. I hope it's not the last of the magic themed biographies from Mr. Steinmeyer.


This book is a must read for anyone interested in magic, magicians or the early days of show business in America.
To get a copy of the book visit Amazon.com

Also, for those magic folks out there take a moment to visit http://www.greenlawnabbey.org/ This is the final resting place of Howard Thurston. Feel free to give a donation to help with the restoration of the Abbey.

Oh and if you want to continue reading and learning about Thurston, you must visit the best place on the internet to read about Howard Thurston, Rory Feldman's great website http://thurstonmastermagician.com/
Posted by Carnegie