Margery and The Bell Box(s)

On January 2 & 3rd 1925 Houdini had challenged Margery the celebrated Boston Medium to appear on stage with him at Symphony Hall. He had become fed up with the Scientific American Magazine's ability to come to a decision on Margery. Taking matters into his own hands he offered up the challenge and put $10,000 in bonds on the line. The challenge was for her to appear on-stage with Houdini at Boston's Symphony Hall and create manifestations that he could not show to be fake. In the event that Margery did not show up, he would spend the time exposing her methods to the audience. Margery did not show up either night and Houdini went about doing his exposure show to the delight of the crowds.

Let me begin with Symphony Hall. This location still exists and is still used today. The address is 301 Massachusetts Avenue, Boston. It's a beautiful building and apparently one of the best buildings ever made for music and acoustics. Houdini packed the house. At least one of the nights Anna Eva Fay another celebrated medium and friend of Houdini's was in attendance.

Houdini brought the 'Margery Cabinet' on stage and proceeded to demonstrate how she caused her manifestations to take place. Among the things he did was ring bells and also cause a 'bell box' to ring as well.

The photo of Houdini in the Margery Cabinet with the Bell Box in front is quite famous. I've seen this photo many times over the years. I've seen a few other black and white photos of the Bell Box as well so if I ever saw the Bell Box in real life I would certainly know it. A couple years ago I stumbled upon the Bell Box, or the supposed Bell Box, in a magic collection. It was on display with a note (see photo below). I immediately wondered to myself, "Was there more than one Bell Box because that is not the one I recall in the photos". I didn't say anything to the owner. I figured that maybe my memory had betrayed me and I was wrong. When I got home I dug up a photo of the Bell Box and sure enough, I was right. What I had seen was not the Bell Box in the photo. I asked around and everyone I asked could only recall one Bell Box. 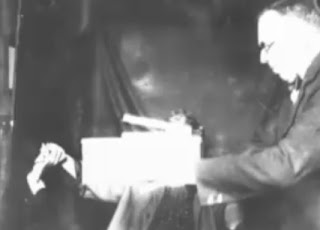 Thank you Kenneth Silverman! His book solved the issue. There were two! One was legit, that's the one Margery was faced with. The other was gimmicked to ring, that's the one Houdini had on stage with him at the Boston Symphony Hall. By the way, there were also two Margery Cabinets as well, one tight as a drum and one gaffed.

I also found a picture of the second Bell Box in action though I'm not quite sure who that is in the photo. For those wondering what the difference between the boxes is, please notice where the opening of the bell box is on the photo with Houdini. It appears to have a 2.5 or 3 inch flap that opens on the top. But the other box opens at the end and has an additional board underneath it, and it's maybe 5 inches long. Though the rectangular shape of the boxes is the same, the tops are different. But again, thanks to Kenneth Silverman's book the mystery is solved! (Incidentally, I might have it reversed, the one in this photo could be the one Margery faced and the one in the photo w/ Houdini could be the gimmicked one. Regardless, there are two Bell Boxes)