The Mystery of the Houdini Hole


There is a hole cut in the stage of the Lincoln Square Theatre in Decatur Il that is referred to as "The Houdini Hole"by the theatre people and the locals in town.  Legend has it that this hole was cut into the stage to allow the water to drain out from his Water Torture Cell. Houdini did stipulate in his performance rider that he required a hole be cut in the stage no less than 8 inches by 8 inches. However, there is no newspaper record of Houdini ever being in Decatur. One local man said it was before Houdini was famous which was why it wasn't in the papers. But Houdini was more than well known by the time he was doing the Water Torture Cell. 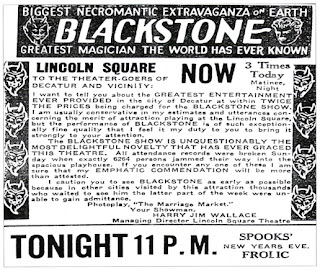 This hole should probably be called "The Blackstone Hole" because Blackstone Sr. played this theatre a number of times over the years. I got the impression that the hole was larger than 8x8 and was probably large enough for a person to go through. That would be ideal for a magician of the time, but not for Houdini.

In fact, the Lincoln Square Theatre is the very theatre where in September of 1942, Blackstone was doing a matinee performance with an audience of 1000 + kids and parents and they received word that the building next to the theatre was on fire. Blackstone calmly told the audience that in order to show his greatest trick, he would need to do it outside. He was able to get everyone out of the theatre in a quick and orderly manner without anyone getting hurt. While that was going on, Blackstone's crew was busy taking their props off the stage and getting them outside into the alley.

Sadly one person did die that day. Ted Banks, who was a close friend of Blackstone and also the show's stage manager, He died of a heart attack that evening in his hotel room. The crew didn't find out until the next morning when Ted didn't show up at the theatre. He died at the St. Nicholas Hotel which was walking distance from the Lincoln Square Theatre.