Name changing to The Magic Detective 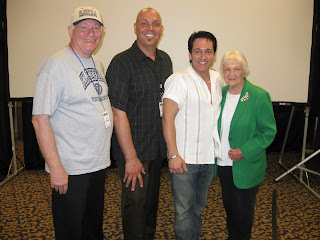 A few months ago a good friend of mine called me with an idea. He asked if I would consider doing a talk on the history of magic for his annual convention. Most people who know me know I'm a huge magic history buff, fantastic, whatever. It was his suggestion to call me The Magic Detective. So at the 2010 Kid-Abra Conference, during a late evening, I hosted an event on Magic History. There were several speakers besides myself. These included Jim Kleefeld, Terry Evanswood and the adorable Adele Friel Rhindress. Jim is a full time performer with a strong interest in the history of magic. Terry is the second most famous person in Pigeon Forge TN and is a huge collector! Adele was a former assistant to Harry Blackstone Sr. and she is simply a treasure.

They all spoke on various topics. Jim and Terry showed pieces from their collections. I actually opened with a short powerpoint presentation of previous 'Magic Detectives' as well as some cool historical locations I've found that were related to magic. I also brought some handcuffs and a few other things.
Adele charmed the crowd with her recollections of a young Harry Blackstone Jr.

It was so much fun. People came up afterwards to check out the various items and to chat with us further.  Because of that and because this blog has taken a turn towards history, I'm changing the name of blog to Carnegie: Magic Detective. It fits a bit better and frankly I really enjoy hunting down these pieces of history. Honestly, any of us involved in the history of magic, whether research or collecting are 'magic detectives'!
Posted by Carnegie