The Strange Phenomenon of Photographing Ghosts 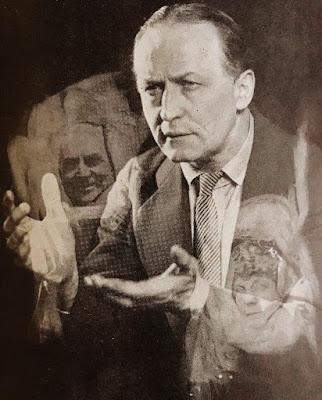 Photography began back in the 19th Century. I'm sure to folks of that time, it was as amazing to them as computers are to us. Photography of the 19th Century was very primitive by today's standards. It was due to this primitive technique that a Boston Jewelry Engraver named William Mumler, accidentally stumbled upon the ghostly image of a cousin who had died 12 years previously. This was in 1862. Mumler showed his photos to others. He swore that his process was legitimate and that these images were of authentic spirit images. As you might imagine, he created both believers and skeptics. The skeptics felt that what he was doing was some sort of trick. The believer felt they were seeing a ghostly image.

Keep in mind, as we look upon these images today, we can tell how fake they are. But people of the 19th and early 20th centuries had nothing to compare it to. It's kind of like when a movie comes out with new special effects and we think about how great it is. But soon many movies use the same tech and we are then able to critic CGI and other methods.

Back in the late 1860s,  a NY Supreme Court Judge, upon seeing these so called Mumler Spirit Photos, went to NY with the intention of shutting Mumler down for fraud. But as it turned out, the gentleman, after seeing the process came away a believer!

In April of 1869, Mumler was brought to trial for Fraud. A major skeptic, and one who testified in the trial against William Mumler was P.T. Barnum, the great circus showman. Barnum took offense to this type of deception and worked feverishly against it. I guess not all humbug was the same in Barnum's world. And in fact, there was innocent humbug and offensive humbug, the latter was trying fool grieving people into believing they could talk to dead relatives. As it turned out, Mumler was acquitted of the charges. 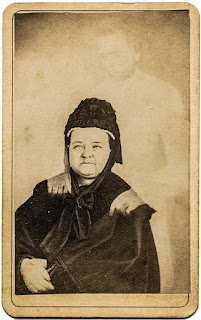 But why was he acquitted of the charges if what he did was clearly fraud? Because, his methods were not so obvious. He had actually developed a system which would later become known as The Mumler Process. And this term was used outside of the spirit world. Mumler's process allowed for what is called 'photo-electrotype' plates. The best description comes from the book, The Apparitionist by Peter Manseau, "the Mumler process, as it was known, allowed printers to forgo the usual step of having a photographic plate copied by hand by an illustrator or wood engraver, revolutionizing the ability to reproduce images by the thousands." In other words, we have Mumler to credit for newspapers and magazines being able to print photographs rather than woodcuts or drawings.

Mumlers most famous spirit photograph was taken in 1872. A woman, dressed in black, turned up at this studio. She was the widow of Abraham Lincoln, Mary Todd Lincoln. This particular photograph would be the last known photo taken of Mary Todd Lincoln, and would be Mumler's most iconic. Mary Todd was known to be a true believer in Spiritualism and remained so all her days. Her photo remains one of the better and spookier images to ever be produced.

Another individual who also stumbled upon a process for making spirit photos was William Hope from Cheshire England. He developed his first spirit photo in 1905. He soon started his own Spiritualist Church. His procedure was wrapped around saying prayers, singing hymns and then eventually taking the photos. Wrapping the whole thing in a religious ceremony would certainly make him different than many of the other photographers who took such photos.  Hope was so impressive with his photos, he fooled famed investigator and scientist William Crookes. Eventually, however his methods were exposed and he was revealed to be a fraud. 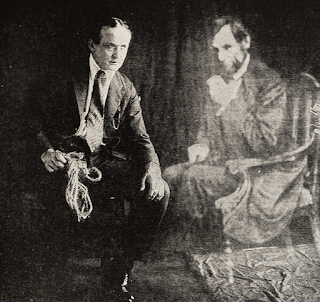 Spirit Photography has gone through its phases of popularity, as has Spiritualism. A few years after the Civil War, it was on the decline. But during and after WW1, Spiritualism began to rise again due to the number of deaths during the war. Families desperately wanted one last word with loved ones, and Spiritualism and mediums apparently offered this opportunity. In comes, Harry Houdini. And actually, it was during this time that Sir Arthur Conan Doyle was involved as well. Sir Arthur Conan Doyle, creator of Sherlock Holmes and avid believer in Spiritualism. In Doyle's eyes this was another example of proof. Sir Arthur could be relied upon to be duped by just about anything. He was no Sherlock Holmes in real life.  In 1922, Doyle published a book called, The Case For Spirit Photography, complete with a cheesy Spirit Photo on the cover of the book.

Houdini on the other hand recognized fraud. In fact, he set up shop in his own home to be able to produce his own Spirit Photos.  I'll say for not being a professional photographer, Houdini's Spirit Photos are as good as any. A few of them, even better than the average. One of his most iconic, also utilized Abraham Lincoln. There are numerous versions of this one. In one he is holding a book and looking at Lincoln. In another, he has his wrists handcuffed. In yet another he has his hands tied. Strangely, Lincoln never changes his pose, but remains the same in every picture. By today's standards we can tell it's faked, but I'm sure it was impressive in his day.

I think my favorite of the Houdini spirit photos is the one below. There is another that I like which is a close runner up, you'll find that one below this spooky one. Both of them were taken inside Houdini's home in Harlem. Of course, Houdini, being the great debunker, and including an expose of fake spirit mediums methods in show final show, helped to squash the fad of spirit photos. In 1924, Houdini wrote his book, A Magician Among the Spirits, which he systematically exposes the various characters and methods of the Spiritualism movement. The first photo in the book, is of Houdini and Conan Doyle. After the publication of the book, Doyle and Houdini's friendship came to an end. 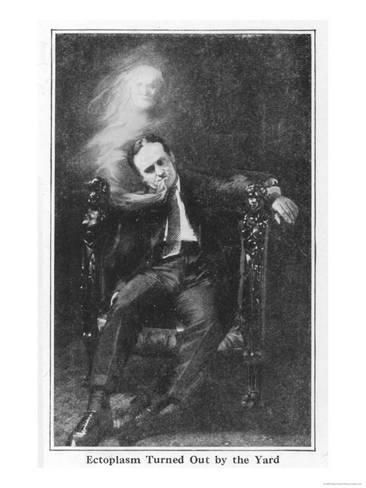