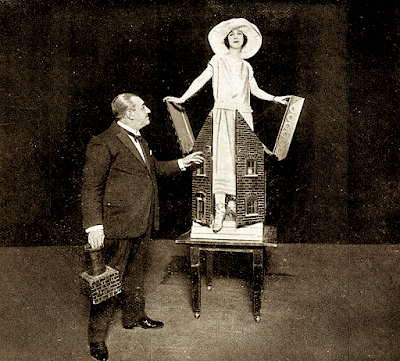 The latest episode of The Magic Detective Podcast will feature Fred Culpitt. Here is a man who has really been overlooked by the magic world. Yet, he was the creator of one of the top 10 illusions of the 20th Century. That's not just me saying that, in an article titled, "Ten Best Illusions of the 20th Century" by Jim Steinmeyer, he lists the Doll's House as #8. Today, 21st Century, it's hardly seen. And there are a load of poorly made Doll's House Illusions out there. But the better ones are truly marvels. They have the benefit of being a mid-sized illusion, yet can pack a big wallop (in other words, are still quite amazing).

One article I came across mentioned that most magicians are lucky to get 90 seconds out their Doll's House Illusion. This is true. Even I've made that error...if it's really an error. I suppose it's more a choice of presentation. As I've also had a routine that was closer to 4 minutes with the Doll's House. And frankly looking back, the longer routine had more going for it.

The Fred Culpitt Doll's House routine was a talking routine. In fact, it was a comedy routine. Though I believe most of the jokes from that time period would fall flat today, not because they weren't funny in Culpitt's time, but because I'm not sure people would understand the humor. For example, as he shows the Doll's House, it is filled with furniture, and there are lines about most every piece that comes out of the box. Then he takes the chimney off the roof of the house and he turns to the audience and says, "Anyone want the flu?" It's both a topical joke, because from 1918-1920 the world suffered from the Spanish Flu Pandemic. But it's also relatable because many people at that time knew what a chimney flue was. Today, I'm not sure they'd make the connection, nor truly understand the joke.

By the way, another of Culpitt's great creations was his Bathing Beauty routine. Truly a wonderful routine in it's simplicity. Easy to understand, the nature of the routine causes the audience to anticipate what is coming, and the finish that everyone sees coming, has a twist to it. Unfortunately, this same trick, The Bathing Beauty is terribly politically incorrect by today's standards. I'm sure it would trigger people to yell words of sexism and misogyny. I find that opinion offensive in itself because you have to take into consideration the time period it came out. I'm including a video below of the Bathing Beauty effect done with a slightly less provocative routine. It's presented for historical purposes only. And after that I follow with a quick version of the Doll's House Illusion.

By the way, the prop I'm using was made by Abbott's, I believe. All of the marketed versions of the Bathing Beauty Trick, were different in method to that which Fred Culpitt created. His version, though it appeared pretty much the same, same effect, the method was drastically different.