I Hate Tricks, Or At Least The Word 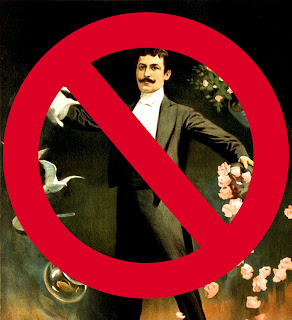 There is a word in the magic lexicon, that I frankly despise. In fact, I think as each year passes I hate it more. That word is 'trick' or 'magic trick'. It makes what we do sound so cheap. The word trick has negative connotations. No one likes to be tricked. For example:

Worst yet
Looking over the list, OUR type of trick ranks 4th on the list. Only slightly above, "a prostitutes client." No wonder I hate the word trick.
Looking to the past, I discovered that Robert-Houdin referred to most of his magic as 'Experiments and or Inventions". Granted, many of his items were inventions, so it fit. But he also referred to card magic as tricks. No doubt because of the manual ability needed to present them. And the charming Johann Hofzinser has references to tricks, carnival tricks and more. So the word has a long history. But in Hofzinser's case the word is used sparingly and it's always joined with other words, like dexterity for example.
I would surmise that the word began when we in the magical arts were known as jogglers, or jugglers. I suppose everything those jugglers did were tricks, tricks of skill. Then over time the term, conjurer and eventually magician, replaced jugglers...though juggler continued on, but it now had a more specific meaning, someone who played with his balls...or something like that. (just kidding, jugglers are skillfully incredible)
My point is, maybe it's time to rethink the word 'trick'. I am aware that there is a huge faction of the magic world that likes to downplay the whole idea of 'magic'. In fact, they put great emphasis on 'tricks'. Penn and Teller, are a fine example. But I also note that they don't only use the word trick, Penn has a large vocabulary.
Think about this for a moment, the movie The Prestige came out and created three words, that I don't recall ever being part of the magic lexicon. Those three words were: The Pledge, The Turn, The Prestige. I love that, but those words seem a bit 19th century for todays world. I am leaning towards the word 'composition'.  It's definition: The action of putting things together; formation or construction.....
also:  A work of music, literature, or art..  BINGO!!! We present magical compositions. We could take other words from this area as well, a word like 'set' for example. Musicians use it to the describe their series of songs, thier set. Longer versions would be 'concert'. Of course, paired with magic, then you get magic set,,,,,,hmmmm?!  Perhaps, 'magical set'.
Do mentalists use the word trick? No, they avoid it. Escape Artists too, avoid the word trick. Even illusionists refer to their next routine as their next illusion, or next piece of magic, etc.. But they rarely use the word 'trick'.
The funny thing is, I don't really mind variations of the word, like trickster, or tricky. But the word trick itself, just bugs me. And maybe in the end, it's just me. Perhaps everyone else is fine with it. What do you think? Do you have an alternative you like? Please share, I'm quite curious to hear other opinions.
Posted by Carnegie