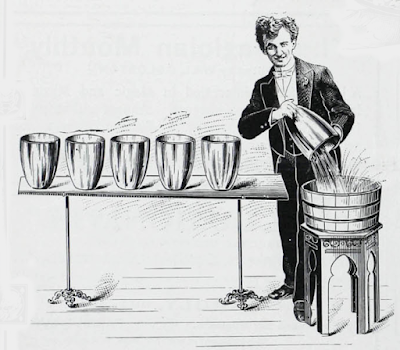 In my quest to finish my podcast on Germain the Wizard, I failed to include one rather significant routine. That routine is Germain's Egyptian Water Jars. It's a very unusual routine, and a very difficult routine. It's been said that only Germain was able to 'pull the magic' out of it*.  What was this mystery?

Stuart Cramer in his book, Germain the Wizard & His Legerdermain, says that this was the trick Germain was best known for, but also the one effect that Germain disliked the most. Where the inspiration for the trick came from is not recorded. If I might speculate however, in 1906, Germain was in England and was known to spend many off hours sight seeing and visiting museums. Of special interest to him were the Egyptian collections. Perhaps seeing items from one of these collections led him to the idea.  He also had another Egyptian effect in the show, Rhadama, The Bride of the Nile, which involved a mummy and a sarcophagus. The mummy comes to life and dances around and then returns to the sarcophagus where it is seen to almost instantly turn back into the wrapped mummy.  In 1918, Germain put this illusion up for sale and I do not know it's whereabouts today. 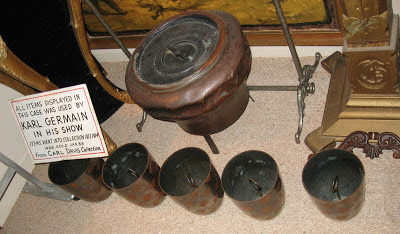 As for the Egyptian Water Jars. Here is the effect: Six Large Nickel plated Jars are shown to be empty and placed upside down on a thin table made of glass. Then one at a time, each jar fills with water, which is poured into an aquarium or tub. In the case of the tub, it would later be picked up and turned over to show the water had changed to confetti.

In 1909, an unauthorized version of the trick hit the market. In 1910, Germain loaned his set of Jars to Martinka so that they could produce them and sell them officially. This was a rarity to Germain, as he was usually very guarded with this methods and secrets. In truth, he was guarded here too because he didn't  give Martinka the full 'work' on the Egyptian Water Jars. As with much magic, there is more  here than the audience knows and together an incredible illusion was created.

I mentioned earlier that 'no magician had been able to pull any magic' out of the Water Jars, other than Germain. That is not exactly true. Many years after Germain died, David Ben was creating a show called simply, The Conjurer. Among the mysteries to be presented was the Germain Water Jars. As it turns out, David Ben, borrowed a set of Water Jars from Jay Marshall and had them reproduced. The Jars that Marshall had were one of the rare Martinka sets. But I have no doubt that David Ben was able to pull the magic from this wonderful prop and present a truly fantastic mystery.

If you'd like to learn more about Karl Germain and his incredible magic, please check out my podcast #25 on the life of Germain the Wizard.
Posted by Carnegie