Review of the book: Powell Master of Magic and Mystery 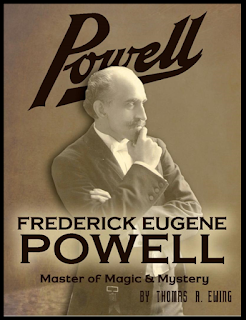 Alright, I'm just going to come out and say it. I gave this book a standing ovation! Seriously! I love this book, Powell, Frederick Eugene Powell Master of Magic & Mystery by Thomas Ewing.

I will be honest, before reading the book, I didn't know a lot about Powell. I had written a couple paragraphs about him on this blog, but nothing very extensive. Then along comes this book, and not a minute too soon.

Who was Frederick Eugene Powell?" Really! Well, Tom Ewing answers the question and many more. 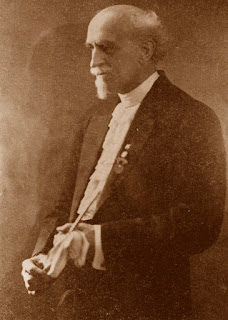 Powell was a gentlemen, he respected magic. He cared for his audiences. He wanted to deliver a great show now matter where he was playing, no matter if it was before a crowd for 4000, or a small group at a school. Powell had a high opinion of magic. He didn't care for the exposure of magic. Yet, Tom Ewing points out, one of his first exposures to magic were tricks taught in a magazine for children.

Powell was a big believer in knowing your magic history. He spoke of Robert Heller and finding Heller's grave in disrepair. Sadly, many years later, so did I. Frederick Eugene Powell was a big hit with Mexican audiences because he spoke Spanish and had knowledge of the culture. He was actually performing in Mexico when the Mexican Revolution broke out. He was also in Mexico when they got hit with some pretty fierce earthquakes.

Powell continued to perform in his 60s and 70s. After all, a showman is born to perform, and Powell was clearly a magnificent showman.

The author uses a combination of newspaper articles, magic magazine articles and correspondence that Powell shared with various magicians, as his source material. And I must say, it is a rich history that is delivered. I also love the fact that Tom Ewing occasionally adds some historical perspective in regards to events happening in the world, while the activities of Powells' life are playing out.

The reader also gets to see quite a few of Powell's props that are today in private collections. In fact, one that is pictured is the umbrella for Powell's Cone and Flower production. In fact, the box of Powell's Spring Flowers is also in the book. Well, below I'm going to post a video of Powell performing his Cone and Flower mystery!

But before I do, I want to encourage you to pick up this excellent book on one of magics most beloved artists and one who has been mostly forgotten to time. You can purchase the book from 1878press.com , although truthfully many magic dealers are carrying the book, so find it somewhere and get a copy. You'll be glad you did!