The Most Famous Magician of All Time 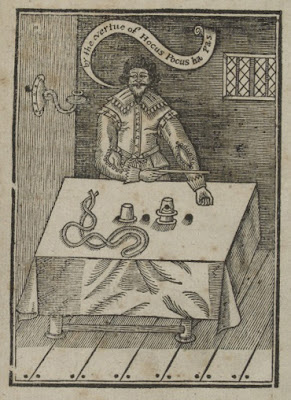 Ask someone who the 'most famous magician' is or was, and you're likely to hear: Houdini, David Copperfield, David Blaine, and maybe even Merlin, if the person is trying to be clever. Certainly all of these individuals are famous and certainly all rank high. But the most famous magician is one you've likely all heard of and yet never heard of. What? Read on.

His name was William Vincent. Surely, you know who I'm talking about now. No? Well, he did not go by his real name. Like many magicians, (myself included), he went by a stage name. And his stage name became so iconic, that even small children today know it. He was known as Hocus Pocus. That's right, the phrase that so many people think of as 'magic words', was actually a magician.

During the reign of King James of England (1603-1625), Vincent was known as "The King's Most Excellent Hocus Pocus." He was a juggler, an artist in legerdermaine. His tricks included the Cups and Balls and the cut and restored 'tape' trick, among others. Vincent began his career in 1619 after receiving a licence 'to exercise the art of Legerdemaine in any Townes within the Relme of England and Ireland.' 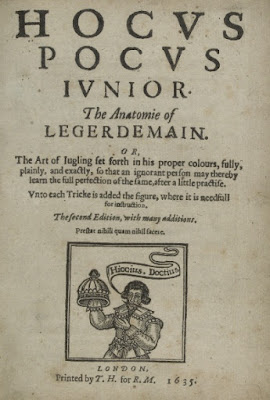 A book titled, Hocus Pocus Jr. was published in 1634. A short book of 50+ pages, it contains a wealth of knowledge on how to present the Cups and balls and many other wonderful tricks popular during the 17th Century.

The new book, The Secret History of Magic by Peter Lamont and Jim Steinmeyer says that Vincent is the author of the book, Hocus Pocus Jr.. Other sources list the author as anonymous, and still other sources say 'it could possibly have been William Vincent'.

Many editions of Hocus Pocus Jr. were printed after the original, and apparently each new edition contained new material. Houdini's copy resides in the Library of Congress and is available to view or download as a .pdf. Here is the link.

William Vincent died a few years after the publication of Hocus Pocus Jr.. according to the website www.hocuspocusjr.com (the actual site is long gone, but you can see the original in the Internet Archive site)