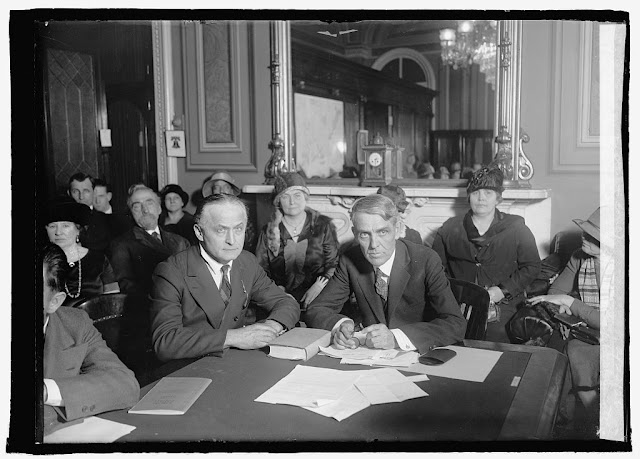 In 1926, Harry Houdini stepped way beyond his role of magician, escape artist, showman, and actor. He does something which was rare for an entertainer. He testified before Congress. This was the ultimate act of attacking the fake spiritualists. Oddly, the bill before Congress was an anti-fortune telling bill.

Fortune Telling? I thought Houdini was after fake spirit mediums?! The spiritualists were not happy to be lumped in with so-called 'gypsy fortune tellers', even though many of them ran in the same circles. Here is an interesting thing I found from an issue of Stanyon's Magic. In the early 20th Century, the spirit mediums began to refer to themselves by a new name, 'psychist'. This word means someone who believes in psychic phenomenon. Of course, in the later part of the 20th century, we would refer to these folks as psychics and even psychic mediums. They could apparently read your mind and tell you the future.

The bill before Congress was House Resolution8989 and it was sponsored by Sol Bloom of NY. It
would prohibit all forms of fortune telling within the D.C. limits. Several other states and localities had similar laws that they were using successfully, so here was an attempt by Congress to implement the same thing. Sol Bloom has an interesting history. He had a background in entertainment. Not only that, he was the man responsible for creating the Midway at the Chicago's World Fair! And among the many entertainers at this event... Yes, Houdini. An article that appeared in the Oct 16th, 1942 edition of The Washington Post mentions that Sol Bloom had an interest in magic. In fact, the title of the article is Master Magician of Capital Hill.

So, if you're going to propose a bill about stopping spiritualists in D.C., and you know you can't do that because the spiritualists claim it's a religion, and they have protection under the Constitution. Then you take a slightly less direct route and go after Fortune Telling and write the bill in such a way that you can snag the fake spirit mediums along the way. And if you're going to do that, who better to call for advice and knowledge, than the number one Spirit Debunker in the country, Harry Houdini! And, it seems clear that the two must have known each other. On the rare chance they didn't meet at the Chicago World's Fair, then they surely met while Bloom was representing Gentleman Jim Corbett. Houdini was in the line-up with Corbett during the 1917 Benefit Shows to raise money for the war effort.

The first day of the meetings was Feb 26th, 1926. The proceedings started at 10:30am . According to the Congressional Record, when the proceedings begun, the bill was read before the committee.

Here is how the bill reads:


"Any person pretending to tell fortunes for reward or compensation where lost or stolen goods may be found; any person who, by game or device, sleight of hand, pretending, fortune telling, or by any trick or other means, by the use of cards or other implements or instruments, fraudulently obtains from another person money or property or reward, property of any description; any person pretending to remove spells, or to sell charms for protection, or to unite the separated, shall be considered a disorderly person. Any person violating the provisions of this law shall be punished by a fine not to exceed $250 or by imprisonment not to exceed six months, or by both such fine and imprisonment."


Then Congressman Bloom addresses the committee. He is asked numerous questions, and there seems to be much debate on the proper placement of commas and such. Then they begin to grill him on content. There is a humorous exchange between Congressman Reid and Congressman Bloom.
Reid: What is telling a fortune?
Bloom: Well, telling a fortune is to make people believe what the future is, to give you a picture that you are going to marry a blond.
Reid: How do you know you won't?
Bloom: I want to tell you something, I am serious about this thing, and I don't want any kidding or joking from you.
Reid: That is the sad part of it.

After much bantering and bickering, Houdini, who may have arrived late, is welcomed before the committee. He answers a few questions in regards to his qualifications. Then he makes his opening statement. He begins with, "This is positively no attack upon religion. Please understand that, emphatically. I am not attacking a religion. I respect every genuine believer in spiritualism or any other religion, as long as it does not conflict with the laws of the country or laws of humanity.
But this thing they call "spiritualism" wherein a medium intercommunicated with the dead, is a fraud from start to finish. There are only two kinds of mediums, those who are mental degenerates and who out to be under observation, and those who are deliberate cheats and frauds. I would not believe a medium under oath; perjury means nothing to them."

And so it began. Houdini was not holding anything back. After his opening statement, the committee asks him questions. Congressman Rathbone asks Houdini if he has read the bill. Houdini replies he has read it eight or nine times. Then it is pointed out to Houdini that the bill never mentions spiritualism. They even direct a question to Houdini, "Is there anything in this bill that deals with spiritualism?". Houdini says, "Yes."

Clearly the committee is confused, and asks Houdini, "will you be good enough to point it out to me where the bill deals with spiritualism?"  Houdini follows with saying that under the guise of being a medium, they will tell fortunes. He makes the claim that 'mediums are clairvoyants'. And in D.C. the govt. gives licenses to clairvoyants for $25. He further goes on to say that there should be no distinction between fortune tellers and mediums as, in his mind, they are one in the same.

Then Houdini continues with describing some of the ways mediums operate, including wrapping themselves under the cloak of religion. They quote from the Bible, claiming it says various things about spiritualism. Houdini points out that he can refute any interpretation they make in regards to Biblical matters. Then Mr. Rathbone asks Houdini, if he is actually attacking spiritualism, because let's face it, it sure sounds like it.

Reading the actual transcripts of the events of Feb 26th, 1926 is fascinating. On one hand Houdini is claiming the bill says a great deal of things, that others claim it does not. For example, not once does it mention mediums or spiritualism. Yet to Houdini's mind, the very fact the bill says, "any person who, by game or device, sleight of hand, pretending, fortune telling, or by any trick or other means....shall be considered a disorderly person" and thus breaking the law and therefor covers mediums. He even declares as much. But when questioned about the difference between fraudulent vs. genuine spiritualist ministers, Congressman Bloom, the bills sponsor,  says the bill is only to weed out those who are bogus.

More than once it is suggested that the bill be redrafted to include some of the language that Houdini and Bloom are claiming is there, but isn't. Others on the committee are frustrated that this bill makes them all look ridiculous. Congressman Bloom points out that a similar bill was held constitutional by the State of New York. And Congressman Gilbert follows with, "Constitutional, but ridiculous."

As the session is nearing the end, Congressman Hammer speaks up and says to Houdini, "I didn't understand what your occupation is."  And I don't think he was alone in that. Some members had no clue who Houdini, one of the biggest names in show business was. Houdini follows with a classic line, "I am a syndicate writer; I am an author, and I am a mystifier, which means I am an illusionist.......I call it mystification, But I do tricks that nobody can explain." There is some conjecture about Houdini claiming real powers, which he flatly denies. He points out that others say he has these powers, but he has never made such claims.

Then Congressman Hammer makes a really astute observation, "These people claim they have divine power. Don't you think it is very difficult to do anything along the line of stopping them? I am talking to you. You have a religion; and I ask you whether, under our form of government, if we ought not to go very slow before we enact legislation along this line? I want some sort of bill; this bill or the New York law or something. I am in favor of amending and making stronger the law to prevent these things you have exposed, in doing which you have performed a great service, although you are rather severe in your strictures of those who disagree with you." This is all addressed at Houdini. Several of the members did think the idea of the bill worthwhile, but they knew that they were dangerously close to prohibiting religious liberties, and any such bill would be tossed quickly on those grounds. 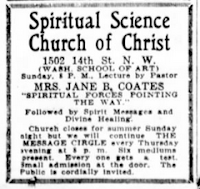 The final person who was brought up to testify was a Mrs. Jane B. Coates, she was head of the American Order of the White Cross Society, and an ordained Spiritualist Minister. She had a clever angle. She pointed out that the bill made no reference to mediums who give spiritual advice, and that the bill should include language protecting the rights of spiritualists to give interviews to members of their congregations or to those who come to them in trouble and sorrow and needing advice. Then she further said their method of pay should be protected as well. Basically, she was wanting them to flip this bill on it's head and do the exact opposite that Houdini and Bloom wanted.


Mrs. Coates got into a discussion with Congressman Bloom on fake mediums vs. real and she said she could trust no one that wasn't a mystic to be able to identify those who are fake. Congressman McLeod asks, "Is Mr. Houdini a mystic?". Mrs. Coates replies, "I think Mr. Houdini is one of the greatest mystics the world possesses today." And Congressman Bloom says, "But he says he is not." And Mrs. Coates follows with, "Mr. Houdini denies everyone's statement that is not on his side of the case."

Despite Houdini trying to butt-in and get his two cents back in the game, the session was closed due to the time. Houdini would have a couple months to reevaluate and prepare for his next meeting, which would take place on May 18th, 1926.


There was additional banter between Houdini and the Congressmen and Mrs. Coates. The newspapers of the day covered a few things that must have been struck from the Congressional Record. I have not included them here, but may post on one particular incident from the Feb 26th proceedings, on another date.

If you thought this session was wild, wait till you hear what happened in May!!!! Part 2 to follow shortly....