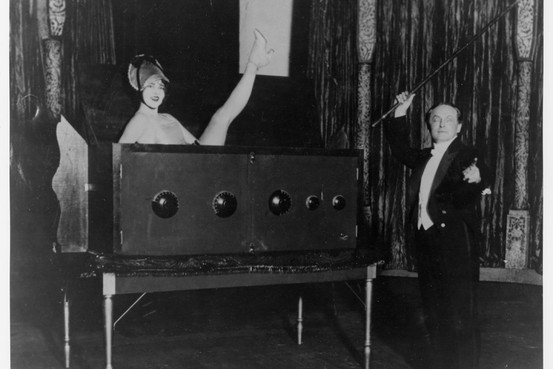 The photo above is Houdini's Radio Illusion. An unusual production effect that was used in his 3-In-1 Show/The Final Houdini Tour. The woman is Dorothy Young, one of Houdini's assistants. She lived longer than anyone in the Houdini show and was featured in several documentaries about Houdini where she always spoke about the Radio Illusion.

Episode 46 of my podcast I talk all about this illusion. But then I mention ANOTHER Radio Illusion. You'll need to hear the podcast in order to find out more. But below is a photo of THAT Radio Illusion. You may note, the front of Blackstone's Radio, it has the same size dials that Houdini's cabinet had. The inner workings are likely being held by the assistant on the far right, somewhat different than those that Houdini had. But awfully ODD that that both Blackstone and Houdini had a Radio Illusion at the SAME TIME?!?