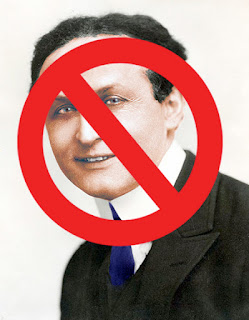 Believe it or not, NOT everyone liked Houdini. Naturally, his competitors didn't like him. Those doing a similar act didn't like him, especially if he got wind of it and went after them. Whenever I think about people who disliked Houdini, one name really comes to mind and that is Dai Vernon. I think Dai Vernon really did a lot to help push the image of Houdini as a bad magician. Although, in defense of Vernon, Houdini could be his own worse enemy when his ego was in full gear. 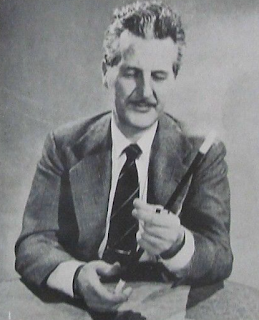 Here is a story that comes from Genii Magazine November 1989. This is direct from Dai Vernon's column called The Vernon Touch. According to the article, at one time Vernon had a store of sorts on Broadway where he cut sillouettes. His walls were decorated with photos of the best magicians of the day, along with photos of a lot of the local magicians. Remember, this is NYC during the Golden Age of Magic, so those local magicians were probably all names we would recognize today. In the corner, was a calling card or visiting card with Houdini's picture and the slogan, "My Brain is the Key That Sets Me Free." As Vernon's relates, "Houdini came into the store one day and saw all the photos and asked me where his photo was. I took him to the corner, showed him the small card and told him how much I loved that slogan."  Houdini was not thrilled with the small card among all the other photos so he told Vernon he'd send a photo over. The next day a huge crate shows up with Houdini's photo. About midday Houdini comes in and asks Vernon if he got the picture. He wanted Vernon to rearrange all the other photos and have Houdini's in the center. That was not the first time that Houdini rubbed Vernon the wrong way. In the end, Vernon who acknowledged that Houdini was a great showman, didn't really care much for Houdini the person. To give you an idea of the time period, Houdini first met Vernon in 1922. So this event described took place some time in the last years of Houdini's life. 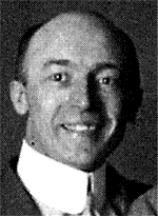 Another fellow who was famous in magic circles, Guy Jarrett, simply hated Houdini. I think hate isn't too strong a word in this case. Part of the animosity came about because Jarrett lost a couple jobs to Houdini. One in particular was, at least according to Jarrett, his idea. He was pitching the idea of Vanishing An Elephant at the Hippodrome in NYC to the director, R.H. Burnside. A small model of Jarrett's Illusion was shown and totally fooled the director. But they never came to terms and the following season, Houdini was brought in to make an Elephant Vanish, which of course he did. And which Jarrett, and a lot of other historians think was not the greatest of Houdini's illusions by any stretch.

There was another reason Jarrett disliked Houdini and that was because Jarrett was married to an escape artist named Minerva. She had a run in with Houdini's people, who apparently put acid into her water filled barrel escape. Quite an underhanded thing to do, not to mention potentially life threatening. I can see where one might hold a grudge. 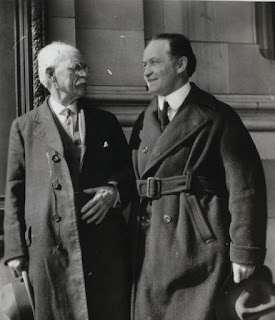 Dr. A.M. Wilson. He was editor of the Sphinx Magazine and for a long time very anti-Houdini. He and Houdini had very open feuds. Houdini wanted his magazine, The Conjurers Monthly to be the official organ of the SAM, while the Sphinx at the time was the official organ. Wilson, rarely mentioned Houdini in the Sphinx and when confronted, Wilson told Houdini he was welcome to take out an ad.  Maybe the worst of it happened when Wilson published the following: "Magic is an art, a science that requires brains, skill, gentlemaness and talent of high order. Brick walls, torture cells, straightjackets, handcuffs, etc., demand nothing but physical strength and endurance, nerve, gall, bluster, fakes and fake apparatus, etc., ad libitium, heralded by circus band advertising. In my opinion, magic is brought into disrepute by all such. Their place is in the side show or dime museums."

But at least that story has a happy ending. The two men eventually reconciled and became good friends until Houdini's last days. I first learned of this feud when I researching the Great Maro for a lecture I had to do in 2015. Wilson was the person to first expose the Great Maro to the world of magic. And as can happen when researching something, looking for info on Wilson led me to the various stories of his feud with Houdini. I never published the information however, as I focused on Maro at the time and planned to use it at a later date. But, I see my friend John Cox has written up in a fine article and even uncovered more than what I learned. Please check out his article about the Wilson & Houdini Feud.

And finally onto Sam Margules. In The Vernon Touch column from 1989, I mentioned earlier, the column finishes with a paragraph about Sam Margules, who according to Vernon, "he was one of the most genuine, nicest guys I've ever met". But then he also added, "Sam Margules thought the worst of Houdini." But a few years earlier, in Vernon's column, October 1971, he says this, "I knew Houdini pretty well because I was around Sam Margules, who was one of Houdini's closest friends in those days." So which was it, Sam the fan, or Sam the hater? I had to look further. And though Margules is featured in a rather interesting event in Houdini's life, I can find no evidence of dislike. In fact, it appears that Margules remained quite friendly with Bess Houdini after Houdini died. If you're wondering what the 'interesting event' is, I'll share it shortly in another article. Please don't give it away if you already know.

The folks above are just the tip of the iceberg when it came to people who disliked Houdini. There are many reasons, among them jealousy, the fact that Houdini could be ruthless, Houdini's huge ego, and I'm sure there are other reasons why he was disliked by his peers. But part of the reason was also due to Houdini's attitude of being perceived as #1. I'm reminded of something that I read in a book called Smoke and Mirrors by Rick Marcelli. He tells the story of a young David Copperfield and Orson Wells. It appears that Orson took David aside and told him" to NEVER put himself on stage with another magician. never share the stage with another magician because only one person can hold that power with an audience. If there is more than one magician on stage that has magical powers then the power dissipates. One lone magician has great power." When I read that I instantly thought of Houdini. It's very reminiscent of his mindset. And though he was friendly with other magicians (as well as not so friendly) he really wanted people to believe he was number one. And in the end it's the perception that rules more than the truth.  Today, despite the many magicians who will tell you that Houdini was not a good magician, the public perceives Houdini as the best. For me personally, I'll take Houdini warts and all. I recognize he could be a real SOB and I also recognize areas of genius. He was and continues to be an amazing figure in the history of the world, like him or not.