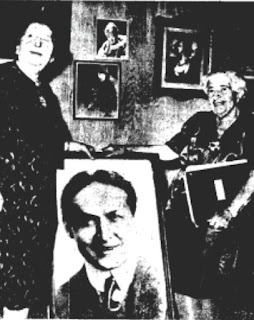 Five years ago, I wrote an article about two of Houdini's friends. One of whom, may or may not been a secret girlfriend. Those friends were Hattie and Minnie Mooser. The only Houdini biography that mentions them is the Kalush biography, at least as far as I can find. There had been a couple newspaper articles on the sisters back in the 1960s. But there was also a person who met and spoke at length with Hattie and Minnie. That person was none other than my friend Steve Baker. He met them in 1967 and listened to them share story after story about their show business friends. But they spoke most often of Houdini. And in the course of the conversation, Hattie revealed something to Steve about Houdini's methods on jail escapes. She swore him to secrecy. And he kept that secret, until 2000, when he told me. But he swore me to secrecy. I was not allowed to say anything while he was alive, and I have never told a soul...until now.

Before I get to that though, I should tell you how they met. According to the sisters, they met Houdini through their brother Leon who was a theatrical agent. They claimed that it was the brother who 'discovered' Houdini. That we know is not accurate, but its possible he could have helped get Houdini booked in the early days. One thing is certain, it's clear the Moosers did know the Houdinis.  There is a 1919 photo of Minnie Mooser, that recently went up for auction. You can see it here.

Hattie claimed to worked as an assistant and filled in for Bess during the Metamorphosis. And Hattie was with Bess watching Houdini's 1923 hanging straitjacket escape from the Tribune Tower building in Oakland. This, according to the Oakland Tribune Newspaper, was when Hardeen had young boys run through the crowd of 20,000 spectators handing out pamphlets advertising HIS (Hardeen's) appearance at the Pantages Theatre, while Houdini hung upside down. A well known story and this is where it happened.

The 1923 Hanging Strait Jacket Escape by Houdini was apparently his second. He first did the escape, from the same building, the Tribune Tower on Nov 22, 1915. According to the Oakland Tribune paper, they were having trouble with the hoist and the rope twisted and Houdini, hanging upside down in the straitjacket was slammed head first into the second story cornice. He was apparently unconscious, or appeared to be. But by the time he reached the 8th floor, he began his escape. He did free himself, but on the way down, the rope got hung up and Houdini remained hanging for a very long time. His face and lips turning colors from hanging so long. Eventually, he was lowered and all was well.

NOW for the big revelation.  Hattie Mooser described a method that Houdini used to hide a key/tools for picking locks during Houdini's jail escapes. I have read other books that had 'ideas and theories', which may or may not have been accurate on how Houdini escaped from jails. Things such as a capsule containing tools he swallowed and later regurgitated, or a small bag of tools that attached discretely to the bed or chair within a cell. I have no doubt that Houdini used multiple methods depending upon the cell and various other factors. But this method described by Hattie Mooser was new to me and struck me as being very possible because it frankly made sense. She claimed he used clay and embalmers putty. The key/tool rested against his skin, then the putty was applied over that. The area, well, let's just say near a very private area, would be hidden from view because of where it was, but it would also be hidden during any sort of frisking. This was before metal detectors so I could see the potential for success. It's quite ingenious. Did he use this all the time, doubtful. But according to Hattie, it was used by Houdini for sure.

The other sister Minnie made a different claim regarding Houdini, which I thought was interesting. In her own words, "Yes, Houdini gave his wife Bess a word to use to call back his spirit, but he did it to prove it could not be done. The truth is that Houdini spent his life exposing spiritualism." Hattie added, "The whole idea of spiritualism is false. Houdini wanted to expose that fraud for what it was worth."

So, I guess all of these Houdini Seances can stop because he has no intention of coming back, LOL!