Back in 1976, a new book of sleight of hand appeared in book stores across the United States. The book was called Now You See It, Now You Don't by author Bill Tarr. The book was illustrated by Barry Ross. The book was divided into sections on cards, coins, and billiard balls. The action of each sleight or maneuver was captured wonderfully in the line drawings done by Barry Ross.  Now You See It, Now You Don't is the all time best selling book in the history of magic. 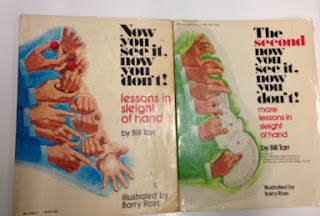 The following year, Bill Tarr followed up with 101 Easy To Learn Classic Magic Tricks. This book was illustrated by Frank Daniel in a very similar style to that of Barry Ross. In 1978, Bill Tarr again came out with another book on sleight of hand, The Second Now You See It Now You Don't and Barry Ross was back as illustrator. Again the book was broken into chapters and delved even further into sleight of hand and manipulation style magic.

For folks growing up in the 1970s, these books, which by the way were published for the general public, were our first exposure to many of magics secrets of manual dexterity. In the 1800s, there was Modern Magic, Later Magic and More Magic by Professor Hoffmann. In the 1930s  and later you had the Tarbell Course in Magic, though this was not for the general public. But in the 1970s the Now You See It Now You Don't Books were the go to book for budding young magicians.

In 1998, Bill Tarr put out another book, this time through magic book publisher Kaufman and Company, the book was called The Now You See It, Now You Don't Notebook. Tarr also put out a video on Basic Card Sleights, Natural Sleight of Hand, and Basic Coin Techniques, as well as a number of tricks including Dazzle and Steel Fingers. Earlier in his life he wrote a column called Slik Sleights for The Conjurors Magazine from Dec 1947 to September 1948.

Who was this fellow Bill Tarr? He was born May 31st 1925 in New York City, NY. At 10 years old he became interested in magic. He would often frequent Max Holden's Magic Shop, as well as Flosso's Magic Shop. This is at a time when folks like Dai Vernon, Doc Daley, Jean Hugard and others were in town, and Bill would watch and study them from afar.

As a teenager he began to do shows around NYC. This was the early 1940s just as World War 2 was starting. Many of the regular magicians were getting drafted, so this left a lot of work for Bill. Though much of the work was not high paying, it was great experience and his audiences were fantastic.  At 17, he enlisted in the Navy and was trained in meteorology. He was stationed in a secret U.S. base  in Siberia. He severed honorably for 3years.

In the December 1947 issue of The Conjurors Magazine, there is an article on Bill Tarr which states that after his time in the Navy he intended on making magic his full time profession.  Despite his life long interest in magic, Bill Tarr actually became a well known sculptor. His most famous piece is was a massive memorial to Dr. Martin Luther King which took 2 years to complete at a cost of $53,000.  The memorial to Dr King is located right next to Lincoln Center. According to Mr. Tarr, "It's probably the largest welded steel sculpture in the country, maybe the world...120 feet in girth and weighing 63 tons."

Besides being a prestigious sculptor, Tarr also occasionally performed a mental act with his wife Yvonne.

It appears all of his books are still available. I don't think the videos are produced any more however.

Special Note: The 'Best Selling Magic Book' quote was from 1988, I don't know if any magic book for the public has since set a new record.

Email ThisBlogThis!Share to TwitterShare to FacebookShare to Pinterest
Labels: Bill Tarr, Now You See It Now You Don't