I should probably have referred to him as the PROLIFIC Henry Ridgely Evans but it's sort of a play on words as you will see.  While going through a wonderful book on history by Ken Klosterman titled, Of Legierdemaine and Diverse Juggling Knacks*, I came across an interesting article titled, 'How I Became Interested In The Magic Art' by Dr. Henry Ridgely Evans.

It seems that a young Henry Evans was fascinated with the book The Arabian Nights as a child. The article even goes on to say that he slept with the book under his pillow.  Years later he came upon an article about Robert-Houdin in an issue of Harper's Magazine. And then in 1877, Professor Hoffmann put out his book MODERN MAGIC, and this took Henry Evans over the edge! He devoured the book and it's material. He soon found a copy of Houdin's biography that he also read through and through.

While attending Columbian College in Washington D.C. one of his school mates encouraged him to put on a show and even offered his home as the venue for such a performance. His friend was Edward Linthicum Dent, and the home was called, The Oaks. Today it is known as Dumbarton Oaks and is a Research Library and Collection institute administered by the Trustees of Harvard University. But in the late 1800s it was a private residence and quite an impressive mansion. In fact, it still as!


According to the article, 200 school children from the area came to see the show put on by the amateur conjurer Henry Ridgely Evans. As is often the case for a new performer, poor Evans got cold feet. In fact, he got more than cold feet, his feet wouldn't even move. He was paralyzed with fear! The kids in the audience got wind of his condition and like wild animals that could smell blood, they were ready to pounce!!! But, Evans somehow gained his composure and presented a fairly decent show, with one exception. His 'Card Star' accidentally released early and cards shot everywhere, when they were not supposed to. It brought about the end of the show, and likely the end of Henry Ridgely Evan's career as a performing magician. Fortunately for us, his fascination with magic remained and he became a very prolific writer on the topic.

Dr. Henry Ridgely Evans would go on to become a valued writer of magic history. He wrote, Magic & It's Professors (1902), The Old and the New Magic(1906), Adventures In Magic (1927), History of Conjuring and Magic (1928), A Master of Modern Magic: The Life and Adventures of Robert-Houdin (1932), Some Rare Old Books on Conjuring and Magic (1943)  I just obtained a copy of The Old and the New Magic and am anxious to delve into it's pages.

I wrote about him previously and you can check out that article here http://www.themagicdetective.com/2011/10/who-was-henry-ridgely-evans.html
Evans died died at Union Memorial Hospital in Baltimore on March 29th, 1949. He is buried in Oak Hill Cemetery in Washington DC. Below is an image of his grave. Incidentally, Dumbarton Oaks, that I mentioned above is right next to the cemetery! I'm sure had I done more research I might have found the home he lived in while he lived in town, but frankly, the weather was making any sort of further adventures difficult. It took an hour just to find the grave because the areas are not marked, at least not that we could find. But  eventually we did find it and I paid my respects. 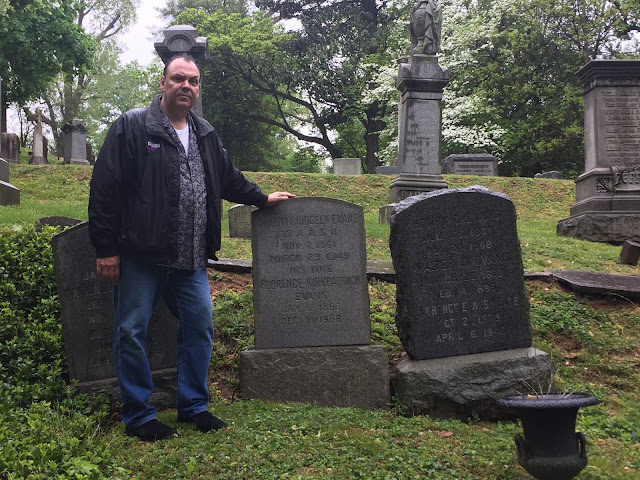 *To be clear, Ken compiled the material in this book, but the material was written by John Braun.
Posted by Carnegie