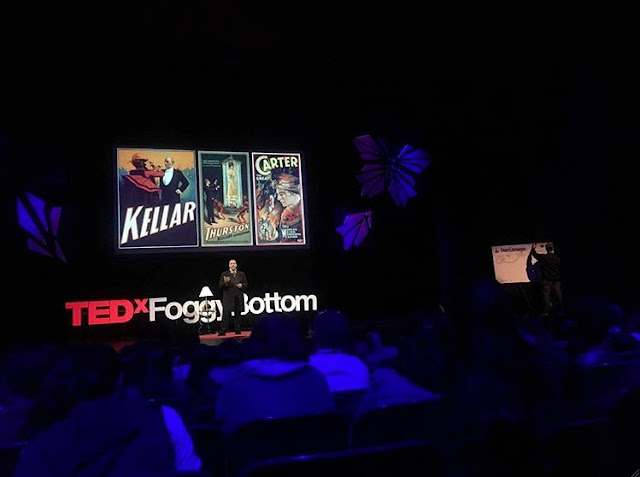 I had the great honor of being invited to speak at a TEDx event in Washington. It was such an enjoyable event. I was asked to speak about magic history and possibly present some magic as well. Not an easy task with a time limit of 8 minutes. All the speakers at the event had 8 minutes to talk. If I had talked ONLY magic history, my speech would have been a bit more in depth. But as it was, I only spoke for 5+ and used the rest of the time for my magic routine. So what they got was a brief overview of magic history.

A TED talk is very different than a lecture. It has to fit within a structure and really move quickly and get to the point fast. Thankfully, the team at TEDxFoggy Bottom were super helpful with guiding my speech in the right direction. As time went on and I rehearsed the speech, I sadly had to cut several  whole paragraphs from the talk. The actual talk is more like 12 minutes, without the magic trick. But I still was able to present a wonderful talk on magic and then follow it up with an unusual piece of wonderment.

If you're wondering the effect I presented, I borrowed a bill and caused it to travel via a Victorian Teleportation Device into a Lightbulb. Actually, the same time the bill traveled to the bulb, the lighting element from the bulb traveled to my Teleportation Device, that's the effect I was going for. Kind of like a mini Metamorphosis trick done with different objects. (and Metamorphosis just so happened to be the theme of the day).

The event sold out so that means they sold 1500 tickets. And what a truly WONDERFUL audience they were! But as wonderful as the audience was, the backstage staff and crew were even more incredible. If only every theatre crew was as attentive and helpful as this bunch. Heck, I'd love to take them with me when we play theatres, they were simply beyond professional!

Eventually, my speech will be posted online, but it might be a couple weeks yet. So if you'd like to get a preview you can check out the incredible graphic that was done LIVE while I spoke by artist Trent Wakenight. Amazingly, he captured all the elements from my talk in the graphic below! 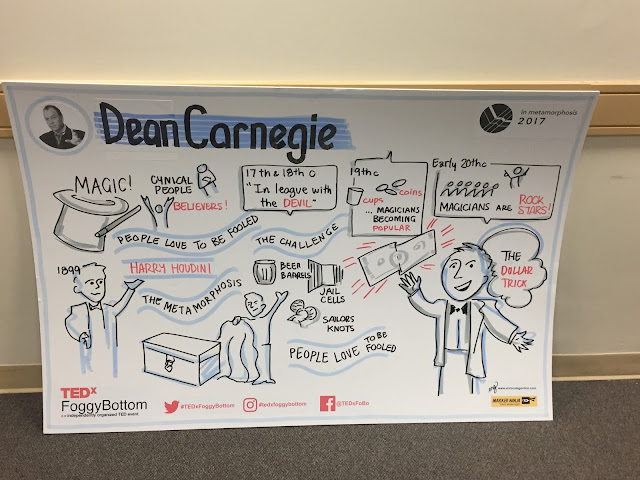