ThrowingCards, The Blog, Check it Out! 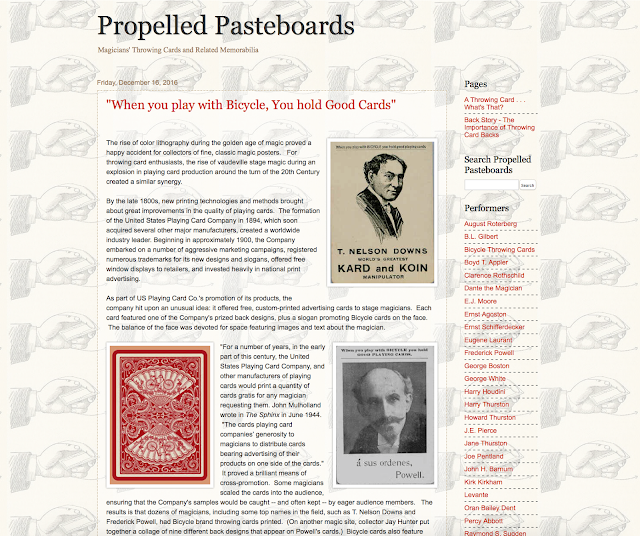 There is a new blog that just hit the internet called ThrowingCards.blogspot.com. It's the brainchild of Gary Brown, who used to have the site Throwingcards.com a number of years ago. That original site was on a free platform that has since vanished into the night, as many of those 'free' sites eventually did. But now, Gary, along with Gary Frank, and Tom Ewing, have restarted the site as a blog. And it's very cool.

What is a throwing card? Well, it's a very clever piece of advertising that magicians would use at their shows and during appearances. From what I've seen, it was a customized playing card with the artists information on the front of the card, and the back usually like a playing card back, but not always. Sometimes, the cards would be from the same stock as playing cards, other times they might be from a thicker card stock. Often the magicians would throw or scale the cards from the stage. In other cases, they might simply hand the card out, like one would hand out a business card. I did not know it, but this was done by a lot of performers, both famous and not so famous. I was aware of the Thurston throw card, in fact, I own one. But outside of that, I didn't really think it was very popular. Wow was I ever wrong!

I would encourage you to go over and check out the site. As I mentioned, they have three regular contributors so I'm sure you're going to see some great pieces. I was so inspired by viewing their site that I am not considering a throwing card of my own! Go check them out,  http://throwingcards.blogspot.com