The Other Blackstone Book Review 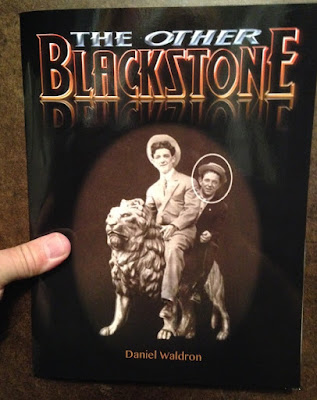 Back in 1999 Daniel Waldron wrote a book called Blackstone A Magician's Life. It was a fantastic biography of one of the true greats in our business. If you've never read it. find it and read it! You'll be glad you did. One of the great things about the book are the first hand accounts by George Johnstone and Nick Ruggiero, both who worked on the Blackstone Sr. Show.

In 2016, a new book was written by Daniel Waldron called The Other Blackstone. Though not as extensive as the first book, it's still an enjoyable recollection of the the other Blackstone. This book is about Alfred Peter Boughton, who was born March 1st 1887. He was the younger brother of Harry. Yes, the name was originally spelled Boughton.  The book has 6 chapters and a epilogue, plus a lot of photos. It's only 40 pages long, so it's a quick read, but it's a fun one. There are some great stories in the book, and as I mentioned, great photos to match.

And the great thing about the book is the co-author, Adele Friel Rhindress, who also worked on the Blackstone Show.  She has her own great book on her adventures with Blackstone called 'Memoirs of An Elusive Moth'. The recollections of her time with Pete really help the reader to see him as a living breathing human being, and give a rare glimpse behind the scenes of a famous touring show.

I remember the first time I saw a photo of Pete. I was confused as to what I was seeing. I thought it might be some double exposure photo that Harry had produced. But then I found out that Harry had a brother. According to Adele, it was Pete who really RAN the Blackstone Show. Harry was the star, but Pete handled everything backstage.

I purchased this book at the Yankee Gathering from David Haversat. I'll be honest, I don't know how many were produced. But I would check with him to see if there any left.