Happy Magic Day, The 90th Anniversary of the Passing of Harry Houdini 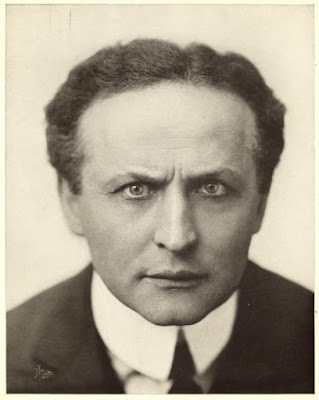 Happy Halloween, Happy Magic Day. Today marks the 90th Anniversary of the passing of magic's most iconic performer, Harry Houdini. There has been quite a bit written over the past 2 weeks concerning this 90th Anniversary. Events are planned and some have already taken place to commemorate Houdini's life and to try and contact his spirit, again.

I hate to be the bearer of bad news, but Houdini isn't coming back. Ouch, that was harsh. But there is good news. Houdini does speak from beyond, sort of. He speaks through folks like Patrick Culliton, John Cox, Arthur Moses, Fred Pittella, David Saltman, Dorothy Dietrich and Dick Brookz, Joe Notaro, Tom Interval, Bill Kalush, Kevin Connolly, and yours truly. And there are probably a few others whose names I missed, my apologies to you if I did. The point is, we are sort of the keepers of the flame. We collect, we research, we discover new things about Houdini and we share them.

Some of us even perform. Just yesterday I did 2 shows which opened with three back to back escapes. I had heard there was a young fellow from Pittsburgh who was going to recreate Houdini's upside down hanging strait jacket escape, and my friend Andrew Basso pays homage to Houdini every time he performs the Water Torture Cell in the show The Illusionists.


Ironically, for us, there is no escaping Houdini.

I had been working on two separate articles about Houdini, both of which I just have not had time to complete. I don't want to put up a partially researched articles when it could be a real gem, so those two articles will have to wait until I have some time to work on them. My fellow Houdini bloggers have more than filled up the space that I've left by not posting, and then some. I had some big plans for #90, but events in my personal life have occupied the majority of my time and prevented me from following through some of the more interesting things I wanted to do.

For now let me wish the Spirit of Houdini the best. I don't think you should congratulate someone on the day of their death. But I can say, even 90 years later, Mr. Houdini, you are sorely missed.

A few years ago I wrote an article tracking the body of Houdini after he died until his funeral. You can check that article out here: http://www.themagicdetective.com/2012/01/tracking-body-of-houdini.html

And if you want MORE Houdini, just follow this link to all the articles on this site about Houdini
http://www.themagicdetective.com/search/label/Houdini
Posted by Carnegie