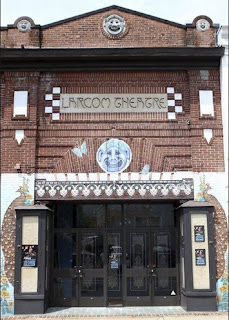 As of yesterday, March 31, 2016, The Larcom Theater in Beverly Ma. went up for sale. This was the second theater owned by White Horse Productions, the folks who put on the Le Grand David Magic Shows for 35 years. They owned both the Cabot St. Cinema Theatre and the Larcom.

Both theaters were built by the Ware brothers of Marblehead Mass. The Cabot opened in 1920, the Larcom opened in 1912. For a time the Larcom had both live theatrical events and films. By the 1930s they mainly showed films. But in 1984, the Le Grand David folks purchased the theatre and renovated it under the direction of Cesareo Pelaez, the company leader. In 1985, a second 2 hour production of stage magic debuted at the Larcom. Originally called Le Grand David in Concert, it was different from the Cabot Show. Only a couple of effects were duplicated, but even those, like the Broom Suspension, were presented in a different manner. 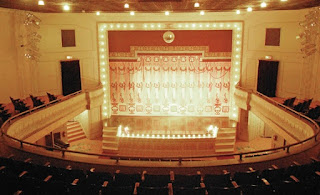 I still recall my first visit to the Larcom. It was during a whirlwind weekend visiting the cast and crew of the two grand theatres. My girlfriend and I were invited guests of Cesareo and we were enjoying meeting everyone. The show at the Larcom took place on a Saturday afternoon. That morning, we had already visited the Cabot Theatre, and watched some rehearsals and even participated in some juggling and dance classes. We were having a great time, but had to get ready to head over to the Larcom for the afternoon show. I assumed the show would be like the Cabot show, but boy was I wrong.

It's true they were both stage magic shows complete with illusions, hand-made costumes, incredible scenery all hand painted by company members, but there was a difference in the who shows. The Larcom show had a different feel to it. It was a tad livelier and brighter. The show at the Cabot had more grandeur and theatricality. Both shows were great, don't get me wrong, but this show at the Larcom had a profound affect on me. Much like the Cabot show from many years before, this show at the Larcom was like a shock to my system, a wake up call, if you will, to the potential of what stage magic could and should be. 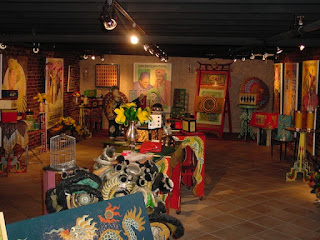 While the audience was getting seated for the afternoon show, I was in the gallery of the Larcom, the basement area that they had converted over to a showroom for older illusions and props. I had been down there for some time with Cesareo and Rick Heath. But they had to go to get ready for the show and naturally, I had to get up to the theatre too before the show started!

When the show began, I was struck by the
brightness and burst of color from the costumes. This show had a different pace from the original show. Perhaps the word festive would be a good description of the show.

Take a look at this one costume worn by Cesareo. Like the original show, there were tons and tons of 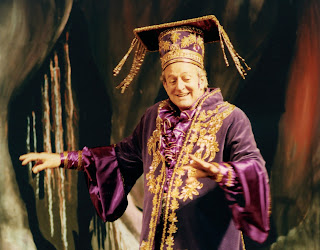 costumes and costume changes in the show. But this purple costume with this most unusual hat, is just the coolest thing. I'm not even sure what you would call this style. It screams WIZARD, but good wizard for sure. If my memory is correct, he wore this during the broom suspension routine at the Larcom. A very different presentation to the one featured at the Cabot, still, the same trick however. I honestly, do not remember if he wore this during any of the other routines. I kind of think not, because the members always changed costumes for each new routine.

I'm trying to remember, but I think it was the Larcom show where I saw David, Le Grand David himself present the Harbin Upside Down production box. This was something that David had built himself and to my knowledge is the only one in existence. I think there was an article about the Upside Down production box in one of the company programs at one point. Basically, it was a box with a handle on the top and the bottom had a flap/door that hung open. David would lift it up and reach under and inside the box and remove numerous items. It really was an unusual trick and a stunning piece of magic, and really a piece of magic history having been the creation of the great Robert Harbin.

My favorite routine in the show was The Orange and the Rice by Cesareo. Why? Because of his mechanical monkey! That little guy stole the show. Cesareo had the entire place in stitches with that routine and with that monkey. Last year, I purchased one of those mechanical monkeys for my own show. I named him Marco, after Cesareo's character.

The only real regret I have about that show was that I only saw it a few times. I wish I had seen it many many more times. The show at the Cabot is burned into my memory because I have a video of the entire performance given to me by Cesareo. Oh, to have one of the Larcom as well. Who knows, maybe David Bull will one day dig through the video archives and share this wonderful show with those who loved it and with those who had not ever seen it.

But for those interested in getting a piece of memorabilia from the show they are having an Auction on April 10th of the remainder of the Le Grand David items. This is your last chance to get a piece of history! http://www.kaminskiauctions.com/servlet/Search.do?auctionId=97
Posted by Carnegie