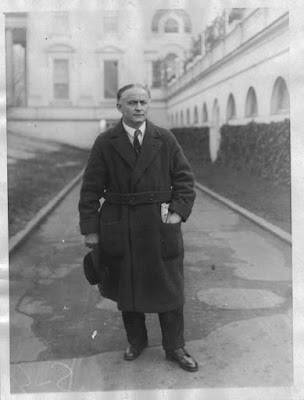 On April 16th, Atlas Obscura is sponsoring an event called Houdini Escapes DC. It's a historical look at Houdini's time in Washington, complete with artifacts from the collection of Ken Trombly, a walking tour of some of the sites Houdini himself had visited and then a show/demonstration of some of Houdini's magic by Dean Carnegie (me).

I have written a lot about Houdini's visits to Washington. And I've visited all but one of the sites where some historical event took place. The one that I have not gone to is the 10th Precinct Police Station, which you can read about here. The only reason I've not gone by is it's still a working Police Station and I don't want to just barge in an disturb them. I'll eventually try and make an appointment to see the station and hopefully the cell that Houdini escaped from.

Many of the buildings connected to Houdini are long gone. Keith's Vaudeville Theatre, Chase's 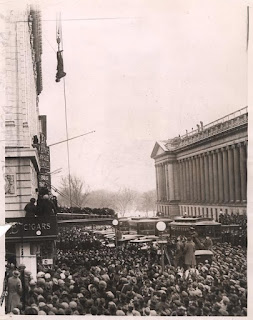 Theatre, The Gayety Theatre, The Rialto have all been torn down and replaced. However, you can still go to the actual locations. The best spot, in my view, is Keith's Vaudeville Theatre which was directly across from the Treasury Building. This is now the location of Old Ebbit's Grill. Back on January 12th 1922, Houdini hung upside down in front of Keith's performing one of his classic straitjacket escapes.  The location of the theatre is very close to the White House. And there is a story of President Woodrow Wilson sneaking into the theatre to catch Houdini's show in the 1920s.

There are many great stories of Houdini's DC visits, many of which will be covered during the walking tour I'm sure. As for my part of the event, the recreation of some of Houdini's magic. I currently am planning on doing some rope escapes, a challenge handcuff escape, an escape from a pair of thumb screws and other escapes. In addition I'm going to 'teach' a member of the audience how to escape from a rope using mind over matter. I'll be doing a little bit of card magic because Houdini began his career as The King of Cards. I'm also planning on finishing the show with an interactive routine involving all the participants. Though the final thing is not something Houdini did, I feel it's a great way to give the attendees a hands-on magical experience and a perfect way to end the day. I've got a few additional surprises that I'm working on as well, but those I'll keep secret until the event.

It's sure to be a fun day. Space is LIMITED, so if you're interested in attending, go to the Atlas Obscura site to get your tickets. Oh, by the way, if you visit their site, you'll notice a photo of ME in the header. Behind me in the photo is a bridge. I don't know if the folks who chose this photo were aware, but that is a bridge that leads into Budapest, the birthplace of Houdini.