A Magical Day of Rememberance 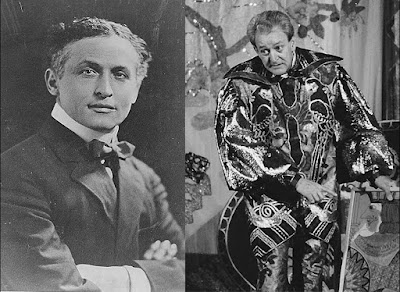 Today marks the 142 Anniversary of the birth of Harry Houdini. It also marks a more solemn event, the 4th Anniversary of the passing of my friend Cesareo Pelaez from the Le Grand David Magic Show in Beverly MA. Interestingly enough, as I type this there is a special 'Birthday Auction' going on over at Harversat & Ewing Auctions. The auction runs till later today March 24th. And on April 10th, there is the Le Grand David Auction II happening online and in Beverly through KaminskiAuctions.com

A couple of days ago, I recorded a brief spot, along with David Bull and Rick Heath about the LGD Auction. You can hear the interview online on SoundCloud. The interviews were conducted by Michael Stroud on his Majinga Over The Edge Broadcast https://soundcloud.com/michael-stroud/le-grand-david-and-his-own-spectacular-magic-company-round-two

Please check out the interview. If you're like me, it never gets old hearing David and Rick talk about their days with Le Grand David. If you listen closely you'll hear some of the audio from one of the performances at the Cabot St. show in the background.

And don't forget the Potter & Potter Auction of Houdini and Davenport items on April 9th.
Posted by Carnegie