The Illusionists @ The Kennedy Center -Review 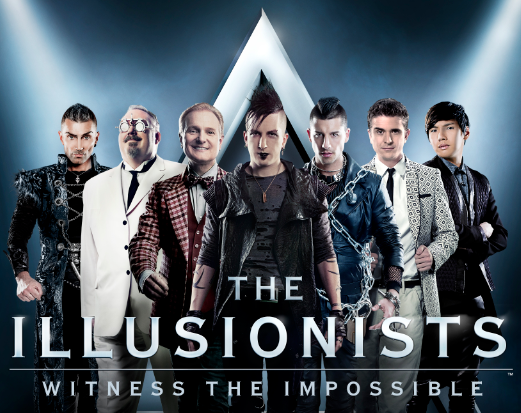 I just returned home from seeing The Illusionists at the Kennedy Center. I can tell you that this show was one of the tightest, most professional shows I've ever seen. Every act was top notch. Every act was different and unique in their own way. The transitions between acts were well done. The live music that is used is such a big selling point. Live music adds a dimension to a show that recorded music just can't capture.

The show opens with sort of a pre-show routine with Adam Trent and a member of the audience. Not really the kind of opening I expected but for a lay audience they loved it. He followed this up with something that totally caught me by surprise, and I loved it and I'm not saying what it was. After this, the show actually begins.

If you've seen clips of the show, basically the opening is each act doing some quick magic routine one after the other. This is solid, eye candy magic, one visual effect after the other. They even introduce Andrew Basso by lowering him from above the stage in a straightjacket. Wonderful opening!

I believe Dan Sperry was up next doing a routine he did on Americas Got Talent. He did the routine silently and with a big screen projector behind him capturing the magic for folks that were sitting further away. Dan performs as The Anti-Conjurer. He has such a clever twist on magic and presentation. I always enjoy watching Dan perform but I think I enjoy watching the audience react to Dan's magic even more. He is odd looking, even scary, and yet he is the one that many people gravitate to after the show. He wins everyone over with his killer brand of magic.

I think Aaron Crow was up next. He performs as The Warrior. I saw Aaron perform at Magic LIVE
and he scared the sh*t out of me. No kidding. I couldn't believe that Stan Alan let him do the act he did at Magic LIVE. It seemed like Lawsuit Central to me. So what did he do here? Same act. I honestly can't say if what he does is a trick or skill, I don't know. I do know that watching him perform this act at the Kennedy Center, I absolutely loved it. His character in Vegas was very serious as I recall. Here, it's kind of serious, but playful at the same time. That playful friendliness takes the edge off a really scarey act. It's STILL UNREAL! It's still breathtaking, and it's still unbelievable. Go see it for yourself. I thought it was incredible. And I wont' say what it is, you've got to experience it for yourself.

The Manipulator was up next. This is Yu Ho-Jin from South Korea. He was awarded Magician of the Year by the Academy of Magical Arts. And he is a past FISM Winner. Let me preface this by saying that I am a Chavez Graduate, which means I went to school to learn the art of manipulation magic. Yu Ho-Jin is a manipulator. I have no freaking idea how he did what he did. That was the most mind boggling card manipulation act I have ever seen. The greatest part about the act, it totally caught this audience by surprise. I could tell, they had never witnessed this kind of magic before and they were collectively blown away. He was tremendous.

Next up was my friend Andrew Basso from Italy. Andrew is The Escapologist and performs a full view Water Torture Cell. Andrew and I are both students of Steve Baker the famous escape artist. Steve Baker always had a very striking personality, very commanding presence on stage. This is a common trait among escape artists. But Andrew has a very different personality. He is humble and likeable and genuine. You want to root for this guy. You are concerned about him. When he goes into the tank of water, handcuffed, you fear for his life. The audience is on his side the entire time. His version of the Water Torture Cell is first class all the way. Andrew is a fantastic talent and the art of escapology is in good hands with him. Though I had nothing to do with his act, I must admit I was very proud of his performance. Steve Baker would be proud too.

And that was the first half, for the most part. I think I may have left off something but you get the general idea. The first half was tight tight tight. It ended with the thunderous applause of Andrew's escape from the Water Torture Cell. Frankly, if the show was over at that point it would have been worth the ticket price.

Yep, there was still a second half to the show! I don't recall the order, but Dan Sperry opened with a very funny and well done Russian Roulette routine.  I think Keven James followed with what might be the best sawing a person in half illusion. By the way, Kevin was in the first half as well, I forgot to mention. I don't want to say what he did in case you see the show. It was awesome though. Kevin James always delivers original and awe inspiring magic.

In fact, I'm not going to say much about the second half except it was just as strong as the first half and featured some really amazing magic. I really enjoyed Adam Trent's act with the jumbo screen, incredible stuff. And speaking of Adam Trent, he does an opening illusion early in the show which is sort of a high tech variation on an older principle that rocks! He is a very likeable performer with a wide range of abilities. His 'futuristic magic' is fun because it's so outside the normal kinds of things you see illusionists do. But in regards to the second half, I simply don't want to go into detail because I don't want to spoil it for you if you attend. The simple truth is, the second half is as rock solid as the first.

The show is in town until Saturday January 11th and then it heads to Dayton Ohio. They are on a 30 city tour across the United States wrapping up in late June. Then in September they head BACK to Broadway.

Magicians in the D.C. area. GET OFF YOUR BUTTS and go see this show. I only saw one magician in the audience, and the reason I knew he was a magician was because he wore a rabbit and top hat t-shirt and his magic coat with his business name on the back. Do yourself a favor, if you attend, dress up, this is the Kennedy Center after all. There are still tickets available for all the remaining shows. The show we attended looked mostly sold out, which was nice. The show ended with a standing ovation and a well deserved one. I think it is very very important for the magic community to support these types of shows. I have said this before and I'll say it again, we are lucky to have shows of this nature traveling the country. It's been many many years since a traveling illusion show came to town. It's so refreshing to see a top notch show and even more refreshing to see an audience of 21st Century lay people totally mesmerized by good magic. The Platinum Age of Magic is in good hands!
Posted by Carnegie

Email ThisBlogThis!Share to TwitterShare to FacebookShare to Pinterest
Labels: The Illusionists