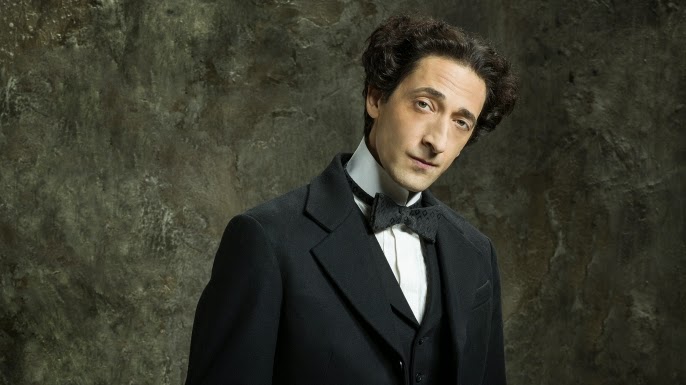 The latest actor to play the part of Houdini is Adrien Brody. Mr. Brody was born April 14, 1973 in Queens, NY. His mother was Hungarian and Jewish, so here is a connection that Adrien has to Houdini. Also, both the real Houdini and the movie Houdini are both Aries.

Adrien's interest in magic began as a kid. I'm not sure what the inspiration was to get into magic, but he actually presented magic shows at children's birthday parties as The Amazing Adrien. That's a tough one because I don't think Houdini ever did birthday parties.....but they both were into magic!!!

At about the age of 11 Adrien attended the prestigious Tannen's Magic Camp. Other past notables who attended the camp include Television Sensation David Blaine, The Prolific and Talented Joshua Jay and the Millionaire's Magician, Steve Cohen. The Camp has been running every summer since 1974 and brings in 130 students every summer to learn about magic. Someone on Facebook mentioned that Adrien was a big fan of Johnny Ace Palmer from back in his Magic Camp days and ran into him at a gig. Imagine having an Oscar Winning Actor as your biggest fan!

There are other connections to Houdini. In 2008, Adrien Brody starred in a movie called The Brothers Bloom with Mark Ruffalo. Mark played Theo Hardeen in the TNT Movie HOUDINI back in 1998. By he way, the co-star in The Brothers Bloom was Rachel Weisz who is reported to be an ancestor of the real Houdini.


The first time I recall hearing about Adrien Brody being into magic was during the promotional tour for his movie The Pianist. Apparently, he claimed that the dexterity he developed during his magic show days came in handy when having to learn to play the piano for that movie.

Monday on The Today Show, Brody even demonstrated a piece of magic. An impromptu stunt of taking a dollar bill and breaking a pencil with it....proving that a simple trick well executed goes over well on TV. Watch this interview and at the end Brody does his magic! By the way, take a look at the background animations on the set, the name HOUDINI appears in the background numerous times with chains and locks under the name that are swaying back and forth. Very cool!