Another Look At Houdini's Needles 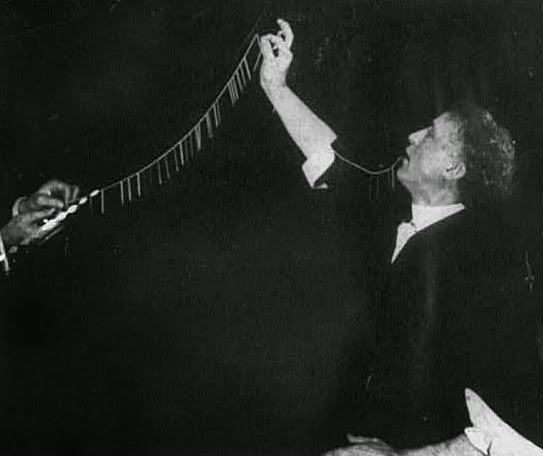 I recently wrote a short piece in which I mentioned Houdini and his Needle Trick. However, today, I came across a curious reference that sort of throws a wrench into the origins of the trick. And yet, it could very well be, that the person who came forward with the information is full of it. Which is it? Read on...

In the book, Of Legierdermaine and Diverse Juggling Knacks by John Braun & Ken Klosterman, there is an interesting story related about Houdini and who taught the Needle Trick to him. The story came from Dai Vernon and he related the story of meeting a gentleman by the name of Howard Hall. Mr. Hall was a play director and script writer and actor. He told Vernon that he taught the Needle Swallowing trick to Houdini and he claims Houdini had a heck of a time learning it. That's very interesting because I never heard that version of the origin story before. I know that Vernon certainly was no fan of Houdini, but he did apparently like Houdini's presentation of the Needle Trick.

As I mentioned in a previous article, according to Patrick Culliton in his book HOUDINI-The Key, Houdini said the trick dated back to a magician in London, Ramo Sami,  who debuted the trick in the early 1800s. Then the trick was reintroduced to audiences in the later 19th Century by Maxey The Needle King. 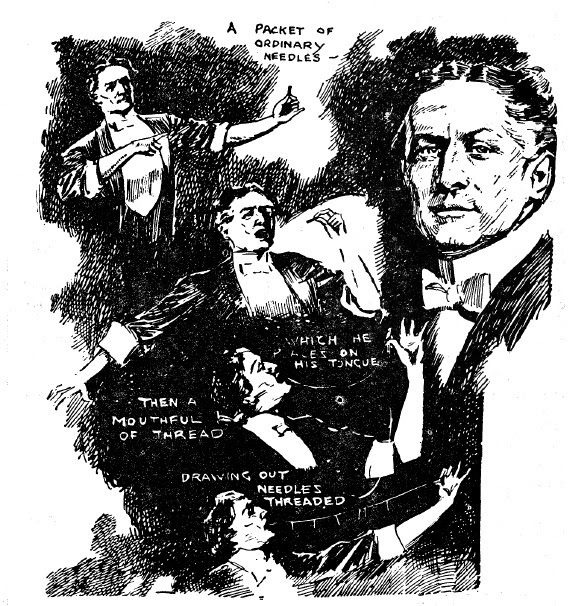 John Mulholland in his book Quicker Than The Eye, again mentions Ramo Samee (spelled differently) who he said was a Hindu magician who visited America in 1820 and that's how the trick arrived here. In the book, The Secrets of Houdini by J.C. Cannell, he claims that Houdini said the trick was first brought to Europe by K. Kraus and then does mention Maxey The Human Sewing Machine. Houdini claims Maxey was the first person he actually saw perform the trick.

Then there is Long Tack Sams recollection of the Needles. He learned the trick in China and performed it in his Vaudeville act for years until Houdini took out a U.S. Copyright on the trick and that prevented everyone in Vaudeville from doing the trick. This information comes from the documentary The Magical Life of Long Tack Sam.

So which story is correct? The trick is commonly known as The East Indian Needle Trick, and perhaps it was Ramo Sami or Samee who gave it that title. I think Jean Hugard, writing in his magazine Hugard's Magic Monthly, said it best, "...the name of the actual inventor will probably remain unknown forever..." And though I'm a little skeptical, it could be Howard Hall who taught the trick to Houdini because Houdini never says who taught him, only where he first saw it performed. But, according to HOUDINI-The Key, the earliest record of Houdini presenting the Needle Trick is 1899 and I get the impression that this was long before he ever encountered Howard Hall. So that part of the mystery continues. One thing is for sure, there is no denying that Houdini gave new life to the trick and it's due to his amazing presentations that the trick survives and thrives into the 21st Century.

UPDATE: Here is an interesting image, provided by my friends at the Houdini Museum. It comes from the December 1891 Scribners Magazine featuring Jugglers performing the Needle Trick on the verandah of the Shepeard's Hotel in Cairo Egypt. It doesn't really help figure out who created the trick, but it does show the trick was around and well known during that time period.

To see all the various articles on the 30 Days of Houdini, click here http://www.themagicdetective.com/search/label/30%20days
Posted by Carnegie