A Secret Houdini Education From a Genii 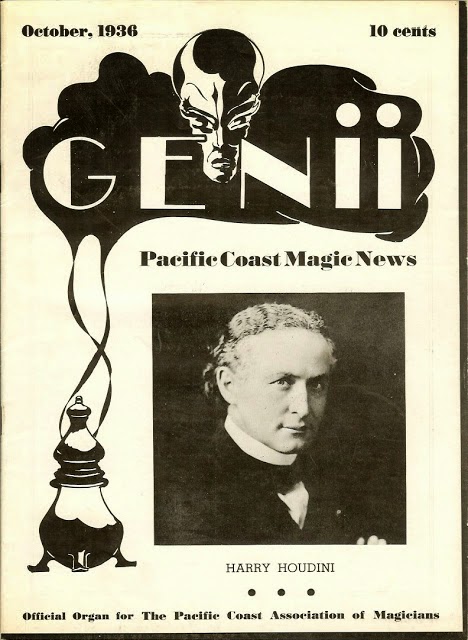 Genii the International Conjurers Magazine has been around since 1936. The second issue of the magazine had Houdini on the cover. I would like to draw your attention to the column 'The Genii Speaks' which is written by William Larsen Sr.. He spends some time discussing the fact that Houdini had been dead now for ten years. Read what he had to say,

"Surely, ten years should reconcile us to his departure. But, it hasn't. When he went, magic lost something; an intangible something which it has never regained. Perhaps it was prestige that we lost, or a leader-or, an idol."

That is a telling statement by someone quite involved in the world of magic. Most any magician, who has been dead ten years, is all but forgotten, sadly. But Houdini's name was being spoken so often it was almost as if he had never left. Mr. Larsen goes on to say that had Houdini lived he no doubt would be involved in theatre, radio and getting himself ready for television. Imagine HOUDINI being an early television pioneer. Wow.

The last half of the article is the part I refer to as 'the secret education'. Mr. Larsen shares his insights on the escape act, the concepts and how to present one properly in 1936. I can tell you, as someone who has performed escapes, he is right on the money. The one area though that I seem to part company with my fellow magi is in the area of the 'fast escapes'. I do believe a quicker pace is helpful in the 21st Century, but I can also tell you from personal experience that a long drawn out escape will also play today, IF structured properly, contrary to popular opinion.

I can also say that being shackled, chained, roped, straitjacketed and so on, gives one a unique insight into Houdini that the non-performer doesn't have. I'm not saying it makes you smarter, I'm just saying it does make you understand some of the things he went through and makes a lot of these challenges really come to life more so than someone who has never been nailed into a packing crate or coffin or some other crazy device.

I can just see Houdini laughing at our modern day expression "Thinking Outside the Box." For him it would have had a double meaning. In truth, that is the escape artists greatest tool, is being able to think outside the box and think under pressure. In the world of the magician we have something called 'outs'. These are preplanned schemes to use in case a trick goes wrong and we can adjust and bring about a successful conclusion regardless of some aspect not going properly. Well, in the world of escapes, if something goes wrong, you can be in serious trouble. You can be facing injury and even possible death. No matter if you are using specialized equipment or things totally 100% legitimate, if something goes wrong you step into the danger zone.  In a great article by Chuck Romano over at his site, My Magic Uncle, he mentions an incident when Hardeen was stuck inside the MilkCan and DoubleFold Death Defying Mystery Box.  This was potentially deadly, but thankfully Hardeen did not panic and had a preplanned out (please go read the article to find out what Hardeen did).

I have had things go wrong with escapes on more than one occasion and let me tell you, your brain shoots into overdrive. You begin thinking so fast it hardly makes sense until suddenly your brain 'clicks' on the right solution and everything comes back into focus. And that is not a panic mode, it's just what happens when you are faced with a potential failure and you need to turn it around.

If you ever get the chance to read The Genii Speaks from Vol 1 Issue 2 of Genii, you'll get a better understanding of the mind of the escape artist once you finish the article.  And despite the fact that there were other people who did escapes before, during, and after Houdini, he was without question the archetype of the grand escapologist.


Oh, if you are a Genii Subscriber, you can go use the digital version of Genii to access this issue.

BY THE WAY, We are now on the final week of the 30 Days of Houdini. So far I have successfully put up an article each day this month of Houdini. The Final Week, MIGHT, have a few surprises...MIGHT, lol. Or they may have to wait until the next 30 Days of Houdini, which will be very different trust me. Keep watching and thanks for being faithful readers of my blog.

To check out the previous articles http://www.themagicdetective.com/search/label/30%20days
Posted by Carnegie