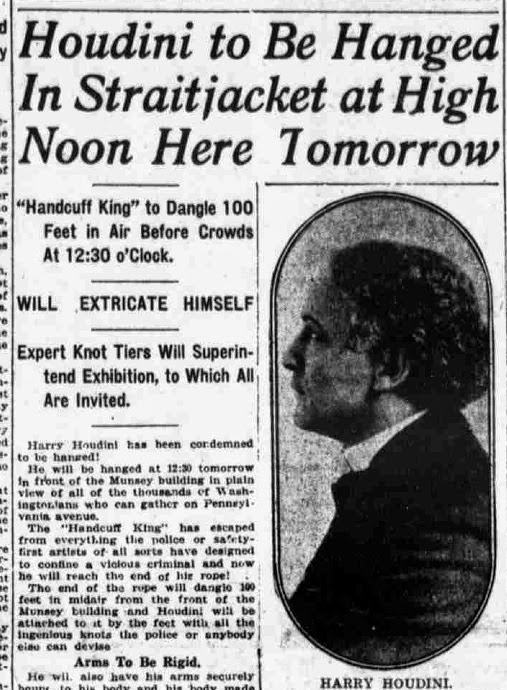 I was going through some old files today and came across an image I had set aside 'for the right time'. As I looked at the date on the image, April 19th, 1916 (98 years ago today) I figured THIS must be the time for this article...except, I apparently already wrote that article a year ago. So, this is a follow up to what I wrote then.

First, let's begin with this little blurb to my right, from the Washington Times, April 18th, 1916. It describes the escape that Houdini has planned for the following day and invites people out to cheer him on. For historical accuracy they mention that the escape will take place in front of the Munsey Building.

I remember the first time I found out about this detail. I had no idea where the Munsey Building was and it took a fair amount of time to figure it out. As fate would have it, even after I found out where it was, I still made some minor errors in my assumptions.

The photo above is pretty much what the Munsey Building looked like when Houdini did his escape. The smaller building to the left is the old Washington Post Newspaper building. And hidden by the trees on the right is where the National Theatre resides. The Munsey Building was torn down in the early 1980s, the Washington Post building was torn down long before that. In place of the Munsey building is a Marriot Hotel.

I will reprint the front page of the April 19th, 1916 Washington Times Newspaper for you, enjoy...

HOUDINI GETS OUT OF JACKET 100 FEET IN AIR
More than 15,000 Persons Cheer as "Handcuff King"
Frees Himself Hanging Head Down

More than 15,000 persons saw Harry Houdini hanged today in front of the Times Building. In just 2 minutes and 30 seconds from the time he was swung into mid-air, trussed up in a strait-jacket from which there is said to be no escape, Houdini wiggled himself free, waved his arm and was lowered to the ground.

As Houdini freed himself from the jacket, the crowd sent up a cheer which could be heard for blocks. As a moment later, Houdini waved his arm to the yelling, applauding throng, and while the cameras and motion picture machines clicked, the men who held the ropes let him down.

CROWDS JAM STREETS
Persons who saw the great throng from windows of nearby buildings said it was the biggest crowd ever assembled in Washington at one place, except for the inauguration of a President. Pennsylvania Avenue and E Street from Thirteenth to Fourteenth Streets were literally jammed. Human beings were packed as tight and close as sardines in a can.

Had To Get Police Aid
There came near being no Houdini hanging. There were too many spectators. The "handcuff king" and Manager Robbins, of Keith's Theater found it necessary to call for police aid to get through the mob that assembled in front of the Munsey building. Robbins was left behind in the automobile, and Captain Peck conducted the star performer of the day to the platform that had been built for him by main strength.
"That's worse than getting out of a straitjacket" said Houdini, when he reached the platform, puffing and setting his clothes back in place, from (continued below)