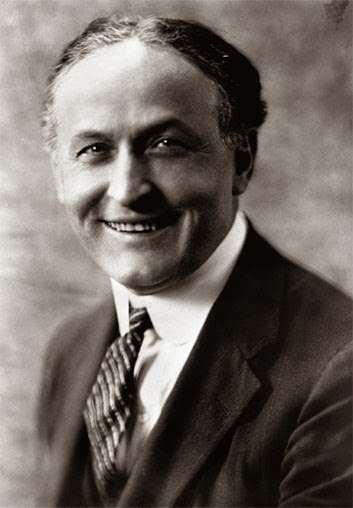 Today, March 24th, 2014, marks the 140th Anniversary of the birth of Ehrich Weiss, better known to the world as Harry Houdini. I'm sure, as his mother was giving birth to young Ehrich in Budapest, she had no idea that her son would become world famous, and his fame would grow even larger after his death.

You'd think that everything that could be written about Houdini has already been covered. But that has proven to be false. New insights and revelations of the Master Mystifier come to light almost every week. Just look at all the Houdini sites listed to the right of this article, along with all the articles I've written on Houdini and you'll see that he is a never ending fountain of information and entertainment.

I think his most amazing feat is his longevity. Sure, the Milk Can was incredible, the Water Torture Cell was awe inspiring, the hanging Strait jacket escape was a thing of genius but all of those have been done by lesser performers (no offense intended). Houdini had something that very few acts ever get, historical timing. The other act that probably can also claim historical timing is a little band called The Beatles. Houdini came along as we moved out of the Victorian era into a Brave New World of industry and technology. The Beatles came along while the world was a fairly innocent place and as the Vietnam War dragged on and the culture changed, the Beatles were there at that same moment in time. Trust me, no one will know who Justin Bieber is in 100 years, but they'll still know Houdini and they'll still be listening to the Beatles.

Houdini has passed the point of being a celebrity and now has moved into the status of legend. His feats seem so wild and crazy that some people are not sure if he was a real person or just a creation of fiction or of Hollywood. Houdini helped to add fuel to that fire while he was alive by embellishing some of his achievements. But in retrospect, he didn't have to. He was extremely fascinating even without the pomp and circumstance.