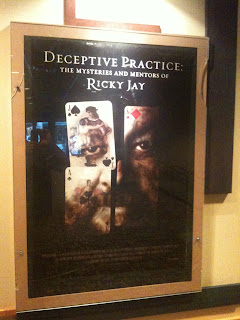 I was very fortunate to see the new documentary about the life and mentors of Ricky Jay. I have a lot of admiration for Ricky Jay so I was looking forward to this documentary. The full title is Deceptive Practice The Mysteries and Mentors of Ricky Jay. The documentary is just as much about the history of magic as it is about Ricky. There is archival footage of Dai Vernon, Charlie Miller, Al Flosso, Tony Slydini, Cardini, Francis Carlyle and more. Portions are narrated by Dick Cavett, long time magic enthusiast and former talk show host. But mostly we hear Ricky telling his own story.

I thought it was very well done. It was interesting watching the movie as a magic insider and also enjoying the reactions of those in the viewing audience who were witnessing much of this magic for the first time. There were bouts of laughter as Slydini presented his Paper Balls O.T.H. routine (from the Dick Cavett Show). And gasps during some of Ricky Jays demonstrations that were caught on film from this stage show Ricky Jay and his 52 Assistants. Oh, and Dai Vernon steals the show several times sharing stories which are quite hilarious and told as only Vernon could tell them.

You'll also get to see a very young Ricky doing magic as he apparently began performing at a very young age. He even took lessons from Slydini and wore one of those incredible costumes that were hand made my Tony. In fact, you see a pretty decent progression from young Ricky Potash to a young long haired Ricky Jay. He mentions his first TV appearance was on the Tonight Show but they did not show that footage. They do however show footage of Ricky from The Alan Thicke Show, DINAH, Mike Douglas, the HBO Special and numerous other TV spots.

You also gain some insight on Ricky through interviews with Michael Weber, who is a friend and business associate of Ricky's. And you get to hear from Ricky's Manager and also from his long time film and stage collaborator David Mamet. One of my favorite stories from the documentary comes from a reporter with the Guardian Newspaper who shared a story of going to lunch with Ricky and having such a profoundly magical experience that it caused her to cry. I don't want to tell you what she said, but for those of us who do magic, pay attention. She tries her best to explain why she was moved so much by the experience. It's worth taking the time to contemplate everything she says because she expresses well, something we often take for granted.

All in all, it was an enjoyable journey through magic history and the life of Ricky Jay. You can see how Ricky is a direct link to magic's past. He learned from Vernon, Charlie Miller and others and even saw Cardini live. Performers who are legends today were personal friends of Ricky Jay. The documentary treats magic respectfully and as a serious performing artform. Do yourself a favor and go see it if it's playing anywhere near you, you'll be glad you did.

It's playing in Washington D.C. at the E St Theatre from now until July 4th. The website lists other locations across the country where it is playing.
http://www.rickyjaymovie.com/
And be sure to go over and LIKE  https://www.facebook.com/RickyJayMovie