It's Over. D.C. Symposium on Magic History 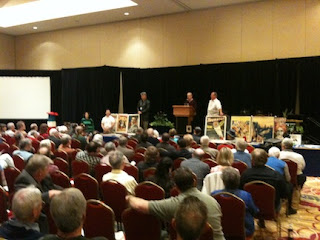 So many highlights to record I'm not sure where to start. Well, let's begin with the auction which was fun to watch, but I got there too late to register for it. There were several Houdini items and some props that had belonged to Tampa and Raymond posters. There was some really cool stuff. But the most amazing piece was brought from California to DC by Mike Caveney. It was a contract, written in Russian for Houdini's tour of Russia. It was amazingly signed with both Harry Houdini's signature and Erich Weiss's signature. It sold for $10,000 to Bill Kalush, but word is he purchased it for someone else who has a big ass warehouse in Las Vegas, at least that's the gossip going around. It was exciting to watch the bidding on that and kudos to Bill Kalush for picking it up regardless of the gossip. Honestly, I hope he bought it for his own collection.

The afternoon lectures were interesting. There was a fellow who was an American of Indian decent named Shreeyash Palshikar who spent some time in India learning about the magicians there and he shared his knowledge of Indian Magic History which I found fascinating. I really enjoyed his lecture. 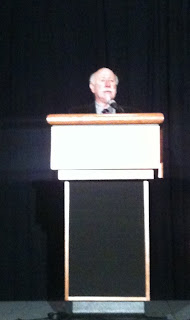 James Hamilton lectured on Alexander Herrmann and his smoking habits. He concluded by showing an item that Herrmann kept at his home which looked like an odd cigar box which could be showed empty and then a moment later would be filled with cigars. The top of the box had a cigar cutter in it and in the top section there was a place for matches and a striking surface. The prop belonged to John Daniel and was willed to James Hamilton. I talked with James about it the day before and mentioned that it looked to me to be a Martinka Drawer Box and he agreed it did and it was possible that it was made by them, but he wasn't 100% sure who manufactured it. What was certain was that it did belong to Alexander Herrmann.

The third speaker was Will Given who talked about The Davenport Brothers. Having just completed a bunch of research on the brothers a while back, I didn't expect there to be anything new in here to me. And in fact, when I first posted this blog I had forgotten about something he said that was NEW to me. I really enjoyed his talk!
By the way, the night before (Friday) Bill Kalush mentioned finding a manuscript written by Houdini which had the 'real work' on the Davenport Rope Tie which has NEVER been revealed anywhere.

The evening had a big delay in the show because one of the acts had not showed up. I think it was just a miscommunication and the show was up and running around 9pm. Darwin Ortiz did a fine job and there were a few lay people sitting behind me that were going especially nuts over his performance!
OH, the M.C. was my old friend Bob Sheets. Bob is like the go-to guy for this kind of thing locally. I always enjoy watching Bob work. He was really funny tonight.

The middle act was the Shreeyash Palshikar  and he opened with a rendition of the Indian Cups and Balls which is different from the cups and balls that we all know. I was familiar with what he was going to do because I recently watched a DVD with Charlie Miller discussing the Indian version of the trick. His version was quite good.

Then Bob came out and did a bit and introduced Eric Henning. He is a local performer and he did two tricks with borrowed rings and also the Linking Rings. Next up was a special guest, Pernel Zorch. If you don't know this name it is Al Cohen, the former magic shop owner and super nice guy. He created a character back in the late 1970s that was a comic magician character. Al actually got me involved slightly as well. He said he was going to do the needle through balloon but couldn't because he didnt have any props. Then I held up a Needle to his surprise and someone else produced a balloon. Then Al went into his routine where the needle bent while trying to push it through a balloon. Funny Stuff! He spoke a little about his creation of the character and then a video was shown of Al doing the act at a convention and it was hysterical.

Bob Sheets came back with more of his zany magic and finally the Indian Magician Shreeyash   returned to the stage to do the East Indian Needle Trick, a Needle through arm and an interesting version of the Sands of Egypt, or in this case, Sands of India trick.

Oh I almost forgot that Johnny Fox was there and he also did a sword swallowing spot on the show plus a tribute to Nate Leipzig which you had to see to believe.

With that, I said good bye to some friends, headed to the dealer room and packed my artwork and bolted. I was exhausted. Sadly, there were several people I didnt get to say goodbye too, but I'm sure I'll see them all again soon.

On a personal note, I had a fun lunch with Wayne Alan today where we mostly talked Houdini. I had dinner with my friend Adele and Trixie Bond and her husband Mark and it was a very fun time. I got to meet and talk with John Gaughan for a bit today and also met Gary Hunt who is a fellow researcher into the life of Wyman the Wizard! He showed me photos of Wyman's House in NJ. So cool to see. And there were other things that went on this weekend that I'm sure I'll remember in a few days but my brain is fried right now from lack of sleep.

OH crap, I just remembered something. I got to meet Arthur Moses today who is a big Houdini collector. I was going to buy some stuff from him but completely forgot. Arthur if you're reading this, I'll put in an order via the web!

Big thanks go out to Ken Trombly and Elliot Blatt who put together a great convention. And also, Ken Norris and Tom Olenick who did the audio visual stuff behind the scenes and kept the conference running seamlessly. Tom Ewing did a GREAT job as the auctioneer and for M.C.ing many of the events. Also a big thank you to my friend Adele for encouraging me to come to this. It was my first magic history conference and I had a wonderful time!