After writing the article on The Cabot Theatre recently, I got to thinking about other magic theatres and venues strictly devoted to magic. There have been a number of them, some more successful than others. I was actually involved with a theatre of sorts with two friends of mine.


It started back in 2000, my friends Ralph Metzler and Adam Burger and I were looking for a place to store our props and possibly rehearse. After much searching we came across an odd place in the back of a shopping center. It was a very narrow space but deep and with high ceilings. We snapped it up, built an office and a loft and hung mirrors to rehearse. It was a really cool place to work and rehearse but it had some drawbacks. For one, there was no air conditioning in the place and in the summer it could get brutally hot. Two, there was no bathroom. Three parking was less than stellar. So even though we liked our spot we kept our eyes open for something else.

As fate would have it, another unit in the back would eventually open up. This unit was 5 times the size of the space we were renting, it had an office that was air conditioned and more than enough room for storage, rehearsals and a bathroom! So we snagged it.

This new unit was also in the back of a shopping center. Coincidentally, in the front of the shopping center was an old movie theatre that had recently shut down. The new tenants wanted to renovate the place and they knew that I had done some shows there in the past and offered to GIVE me as many seats as I wanted. So my two friend and I loaded up 100+ cast iron seats and lugged them to our new location. It was back breaking work and we only did it because Ralph and I had this crazy notion of fixing them up and selling them on eBay!  As it was, our friend Adam suggested taking some of the seats and putting in a theatre. I'm not sure how keen we were on this idea at first, but he kept bringing
it up, so in the end, it was really his idea to have a theatre.

That is where things begin. But now it was a matter of transforming what was essentially a warehouse spot into a theatre. We wanted to keep the warehouse look, but 'clean it up'. And we had a tight budget....practically no budget really. So we painted the walls black. We purchased industrial looking lights that we could hang down from the ceiling. There were probably 25 or more lights. We put our old mirrors back up at the back of the area that would be the theatre. And to show just how devoted to the concept we were, we only installed 30 seats. Eventually we would install 50 seats. 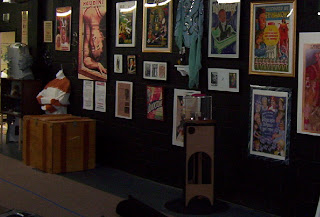 The walls were decorated with vintage magic posters and various pieces of memorabilia. The theatre area itself was covered with my magic paintings. Along the wall as you walked into the theatre were large scale magic illusions on display.

When we were working or rehearsing in the space we always used the florescent lights that were part of the unit when we moved in. But when it was time to transform the place, we turned off the florescents and turned on the hanging lights. The first time we did it we were stunned at how cool the place looked. I had come up with the name 'Underground Magic Theatre' (UMT). And we were the 'first' to use the underground name, before Mark & Jinger's Magic Underground, and before others as well.

Though having our own theatre was our friend Adam's idea, he actually didn't want us to install the seats. He thought folding chairs would be better. But the inspiration for what it would become came from two sources, the Larcom Theatre in Beverly MA and Robert-Houdin's Theatre in Paris. At the Larcom, which is the sister theater to the Cabot, they have a huge room upstairs with a gallery of magic posters on display. In the basement is another gallery of all their props and illusions that have been used over the years and were retired from the show. The way this looked inspired what would become known as the 'magic museum' area of our space. The intimate theatre was really from Robert-Houdin and just as he did everything from stage magic to illusions, so would we.

We did not have a raised stage, it was floor level. And the front row was actually part of our performing area. There was an isle down the center dividing the chairs into two sections. My friend Ralph sewed the fabric of what would become the theatre curtains for the entire run. And though I helped, Ralph also drilled 99% of the holes in the concrete so we could install all the cast irons chairs! 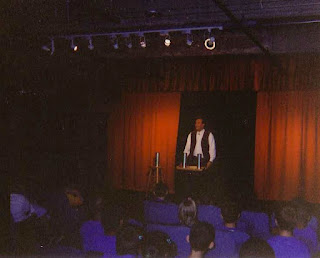 We used the space for rehearsals, video taping segments of our shows, magic lectures, magic workshops, birthday parties and field trips. In the summer months, I offered field trips to Summer Camps to visit 'The Underground Magic Theatre'. Not really sure how it would play, it became a surprise to everyone involved that the concept took off! During the first show, the audience was so into things, two boys in the back of the theatre were heard saying "This is awesome magic" and his friend replied, "NO, this is UNDERGROUND magic!". As part of the field trip, the campers saw an hour long show and were taken on a guided tour of our magic museum. First year, we also offered a magic class, but we discontinued that after year one.
We found the show and tour of the museum was more than enough value as people would contact us saying "this was the kids favorite field trip of the summer". Oh, and we did not do a 'kids magic show'. We presented a theatrical magic show with stage magic and illusion and music and costumes. In fact, one evening we opened the theatre up to adults and they loved the show as much as any camper that had come through. It was never designed as a kids venue, it was designed to impress all ages.

My friend Ralph used the theatre to present birthday parties. It was so cool because he could do a much larger show, then set up tables and chairs for the party. We never advertised the parties yet stayed pretty busy with them.

The theatre also became a 'hang out' of sorts for magicians who were passing through the area. Of the magicians who stopped by at one time or another, they included: Bob Sheets, Bob Fitch, David Kaye, Ken Scott, Mark Daniel, Tim Hannig, Jozo Bozo from Croatia, Joe Romano, Bruce Bray, Scott Humston, Joe Holiday, Dave Risley, Trixie Bond, and many others.

The theatre ran until the end of Summer 2005. At that point, my friend Adam had already moved away. My friend Ralph had decided it was time for him to move as well and he moved out west. The theatre didn't seem the same without my friends, so I closed it down and regretted the decision off and on for years.

It's now 2013, and for the first time since we closed the UMT, I've decided to take a version of that show back on the road this summer. I call it 'The Traveling Underground Magic Theatre Show' and basically taking the best parts of the theatre shows and creating a traveling version. There won't be any illusions, at least not as of this date. But the show will be about the 'history of magic' so it will be fun and educational at the same time. It will pay homage to the original venture, but this will be something unique in it's own way.

Below is a video of what the place looked like with the florescent lights up. It was not the look that theatre goers saw however. But it's still pretty cool looking back. Coming Soon: Part 3 The Magic Salons