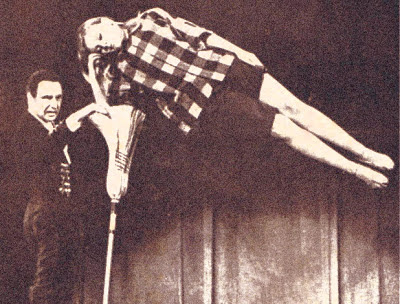 A recently wrote a blog article about the Richardine Family and the Richiardi Family. I had never heard of the Richardine until I stumbled upon them via AskAlexander.com. It was an eye opening bit of research. In the article I mentioned something about Aldo Richiardi's unique take on the Broom Suspension.

I tend to think a true artist is never satisfied and is always striving to improve and make their performances better. Richiardi changed his Broom Suspension in various ways over the years. One of the incarnations was a story based routine in which Richiardi apparently discovered a handicapped boy and caused him to float in the air and then walk on his own. A powerful visual story and one that he apparently passed on over time in favor of a much faster, more direct presentation.

Imagine my surprise to discover that a version of that story routine found it's way into one of my favorite magic shows, the LeGrand David Magic show in Beverly Ma. I was watching a video of the show that Cesareo had given me years ago and there it was, Webster Bull narrating the story of Marco the Magi seeing David for the first time, but David was unable to walk. This led into the Broom Suspension illusion just as it had with Richiardi's routine. I had seen them perform this many times and loved their version but never knew it's roots were with Richiardi.

I remember sitting in the theatre of the Cabot St. Cinema Theatre one day talking with Cesareo. It was a Saturday when the company was busy in rehearsals and he was telling me about seeing Richiardi Sr. and how he recalled this curly haired boy that used to run around the theatre during intermission. That curly haired boy was a young Aldo Richiardi.

I also knew that Cesareo was greatly inspired by David Bamberg, who was known as FuManchu. But it's clear to me now that Richiardi's magic had also inspired Cesareo. Within the LeGrand David Show there were several routines that were Cesareo's take on what Richiardi had done. They included, The Broom Suspension, the Toy Car Levitation and the Dekolta Chair with tip over trunk. 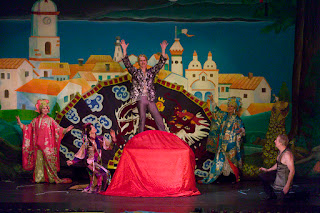 The Le Grand David Company were not the only one's who carried on Richiardi's magic. Scott Alexander, who was a recent contestant on America's Got Talent, does a fantastic job with the Richiardi version of the Lemon, Egg, Canary effect. I've seen the DeKolta Chair/Tip Over Trunk combo in several different magic acts. I saw the Masked Magician of all people do Richiardi's Buzz Saw on a Talk Show (and he did not reveal it). And yours truly performed Richiardi's version of the Rice Bowls for a time. More than any particular routine though, I think Richiardi's charasmatic style can be found in numerous acts, including Jonathan Pendragon and Joaquin Ayala.

Let me say, I don't think it's right to copy living performers, but I don't think there is anything wrong with reaching back into history and bringing back some of the fantastic magic that these icons made popular. The magic of Richiardi, Le Grand David, Thurston, Houdini, Dante, Blackstone, Doug Henning and so many others deserves to live on for modern audiences to enjoy.