David Bull, One of the True Masters of Magic 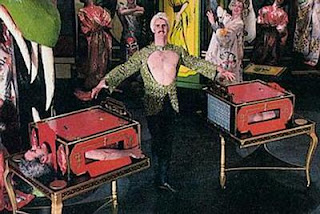 There is a magician who in my opinion is one of the great performers of the 20th and 21st century. But he is often overlooked and that is a shame. His name is David Bull, but you probably know him better by his stage name Le Grand David. He was the star of the Le Grand David Magic Show in Beverly Mass, along with Marco the Magi and a big cast of fantastic fellow performing artists.

The Le Grand David Show was the longest running resident magic show in the United States. They began back in 1977 and ran the show every year until June 2012. This fall was the first time in the history of the company that they did not return for a new season. The patriarch of the company, Cesareo Pelaez passed away in 2012 and it's clearly been hard on the members of the group. And frankly, they more than earned a break. 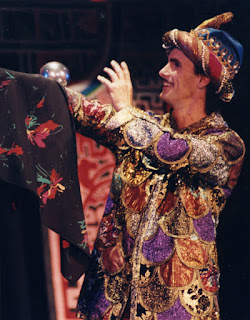 But it's David Bull I want to talk about. Here is a fellow who got into magic basically from a conversation he had with Cesareo. Now Cesareo would later become his mentor, but it's David who put in the hours and hours of practice and rehearsal to develop incredible magical skills. I think he's one of the best, if not THE best manipulator I've ever seen. His skill with Billiard Ball manipulation is breathtaking. But he's also just as adept at coin manipulation and dove productions and his Linking Ring skill is among the best there is. Then there is David's take on the Zombie Ball, I mean what can you say really, it's perfection.  He handles apparatus magic better than anyone out there and his skill as an illusionist is first rate. He does it all with a style that is rarely seen today.

I remember trying to put my finger on David's style a few years ago. I ran down the list of attributes and then it dawned on me, David exhibited from the stage pure confidence. Not arrogance, not a prideful or boastful attitude, just plain confidence and he was pleasant and friendly the entire time. There was also a playfulness about his on stage character at times and other times a seriousness to his performing. He commanded the stage when he was on it but could easily share the stage with fellow artists and performers and had no problem with letting their light shine as well.

As I mentioned, Cesareo Pelaez was David's magic mentor and he was also the creator of the show as well as director. I often wonder if Cesareo had someone in mind that he wanted David to be like when he was helping David along, or if he just showed David what tools he needed and let David himself shine. Ah, and there is the answer, Cesareo was letting David's personality shine on stage!

It appears that one chapter of the Le Grand David saga is over. I was fortunate to watch that first chapter unfold. A new chapter awaits. The pages are blank and I hope that David returns to the stage, along with his fellow artists and performers. Who knows what the future holds for them?  For over thirty years they did what countless others only dreamed of, they did miracles. I think whatever they decide to do, it will be enchanting!